Items related to Votes, Money, And The Clinton Impeachment (Transforming... 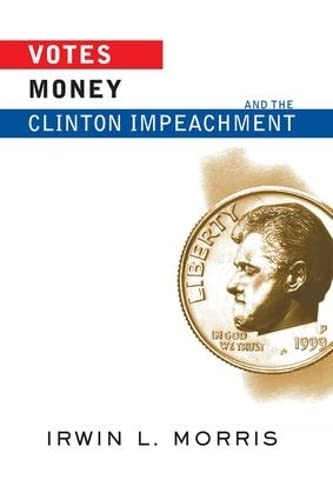 In the first in-depth examination of politics of the Clinton impeachment, Morris looks at the impact of local constituencies on impeachment rather than the popular press focus on partisan animosity and ethical standards. Though most legislators sided with their constituents on the issue of impeachment, a significant number―nearly all Republican―did not. Using the most recent work on the impact of money on elections, Morris investigates the financial dynamics of the Clinton impeachment and argues that our current system of campaign finance enabled House Republicans to impeach the President and provided them with the means to retain their majority in the House. Morris also argues that money (and the ability to raise it) play a far more important role in the American political system than previously realized, often determining the winners and losers in the most important controversies and conflicts facing the nation.

Irwin Morris is associate professor of government and politics at the University of Maryland. He received his Ph.D. from University of North Carolina in 1994. He writes on monetary policy, executive-legislative relations, Southern politics and public opinion. He is also the author of Congress, the President, and the Federal Reserve: The Politics of American Monetary Policymaking.

"A straight-forward and appealing examination of the factors behind the Clinton impeachment....Well written and lucid." -- -Ross K. Baker, Rutgers University

1. Votes, Money, And The Clinton Impeachment

2. Votes, Money, And The Clinton Impeachment

7. Votes, Money, And The Clinton Impeachment