Items related to Women in the Vanishing Cloister: Organizational Decline...

Women in the Vanishing Cloister: Organizational Decline in Catholic Religious Orders in the United States 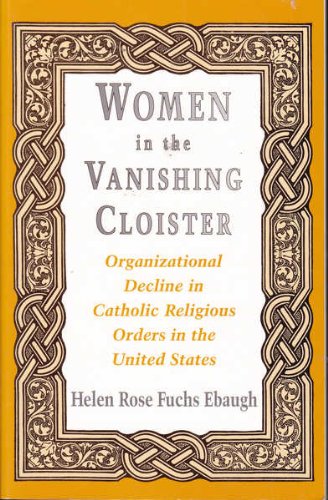 Religious orders for women have existed for fifteen centuries, but their future in this century is bleak. In 1966, 180,000 women belonged to Catholic orders; by 1986 that number had decreased to 126,000. Helen Rose Ebaugh tells the story of the decline of these orders, set against the back drop of rapid social change and religious reform.
To illustrate the problem, Ebaugh takes us into a declining order, here named the Sisters of Service.  In 1990, only one candidate sought admission to the order, and the median age of members reached 70. While these demographic changes were occurring, the sisters adapted themselves to the reforms of Vatican II. The concept of a cloistered life faded. Nuns sought college degrees, gave up their habits, moved into apartments, and began to identify with the outside world. Vatican II further encouraged the nuns to democratize and decentralize.  Many nuns accepted jobs that paid poorly but were consistent with their goal of social service. They identified with the feminist movement and in turn influenced it.
Ebaugh shows how declining orders have not followed the sociological model of organizational decline, one typically marked by centralized authority, a fear of risk taking, lack of direction, internal conflicts over turf, and low morale. Rather, they have established democratic structures, reduced internal positions in favor of committing resources to empowering the poor, abandoned security in favor of diversity in jobs and missions, minimized conflicts over scarce resources, and exhibited a sense of freedom rather than poor morale.
Although Ebaugh is convinced that Catholic orders in the U.S. will not continue for long, non-canonical communities of women and associate programs are growing. Dedicated women can perpetuate the mission and spirit of the order without becoming vowed members.

Helen Rose Fuchs Ebaugh is a professor of sociology at the University of Houston. She is former president of the Association of the Sociology of Religion.

Sociologist Ebaugh ( Out of the Cloister , Univ. of Texas Pr., 1977, and Becoming an Ex , Univ. of Chicago, 1984) continues her studies of American Catholic nuns with this look at their approaching demise. Ebaugh zeros in on the pseudonymous Sisters of Service, representative of most contemporary orders in that as fewer women choose to enter convents, middle-aged members have departed, leaving the sisters with a median age of 70 in 1990. Ebaugh addresses the causes of this phenomenon, contrasting the Sisters' outward, participatory response with that of American corporations' tendency to grow more centralized and authoritative when threatened. Religious life has undergone sweeping changes in the last decades: Most younger members recognize that the order will probably cease to exist during their lifetimes, yet they continue to seek new social structures within which to work. Highly recommended for both organizational studies and religious studies collections.
- Debbie Bogenschutz, Cincinnati Technical Coll.
Copyright 1993 Reed Business Information, Inc.

1. Women in the Vanishing Cloister: Organizational Decline in Catholic Religious Orders in the United States