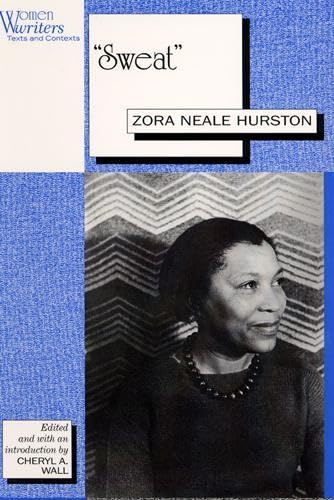 Now frequently anthologized, Zora Neale Hurston's short story "Sweat" was first published in Firell, a legendary literary magazine of the Harlem Renaissance, whose sole issue appeared in November 1926. Among contributions by Gwendolyn Bennett, Countee Cullen, Langston Hughes, and Wallace Thurman, "Sweat" stood out both for its artistic accomplishment and its exploration of rural Southern black life. In "Sweat" Hurston claimed the voice that animates her mature fiction, notably the 1937 novel Their Eyes Were Watching God; the themes of marital conflict and the development of spiritual consciousness were introduced as well. "Sweat" exemplifies Hurston's lifelong concern with women's relation to language and the literary possibilities of black vernacular.

This casebook for the story includes an introduction by the editor, a chronology of the author's life, the authoritative text of "Sweat," and a second story, "The Gilded Six-Bits." Published in 1932, this second story was written after Hurston had spent years conducting fieldwork in the Southern United States. The volume also includes Hurston's groundbreaking 1934 essay, "Characteristics of Negro Expression," and excerpts from her autobiography, Dust Tracks on a Road. An article by folklorist Roger Abrahams provides additional cultural contexts for the story, as do selected blues and spirituals. Critical commentary comes from Alice Walker, who led the recovery of Hurston's work in the 1970s, Robert Hemenway, Henry Louis Gates, Gayl Jones, John Lowe, Kathryn Seidel, and Mary Helen Washington.

Cheryl Wall is an associate professor of English at Rutgers University. She is the editor of Changing Our Own Words: Essays on Criticism, Theory, and Writing by Black Women (Rutgers University Press) and the author of Women of Letters of the Harlem Renaissance.

Book Description Paperback. Condition: New. Paperback. Now frequently anthologized, Zora Neale Hurston's short story "Sweat" was first published in Fire , a legendary literary magazine of the Harlem Renaissance, whose sole issu.Shipping may be from multiple locations in the US or from the UK, depending on stock availability. 246 pages. 0.340. Seller Inventory # 9780813523163