Items related to The Pursuit of Pleasure: Gender, Space and Architecture...

Rendell, Jane The Pursuit of Pleasure: Gender, Space and Architecture in Regency London

The Pursuit of Pleasure: Gender, Space and Architecture in Regency London 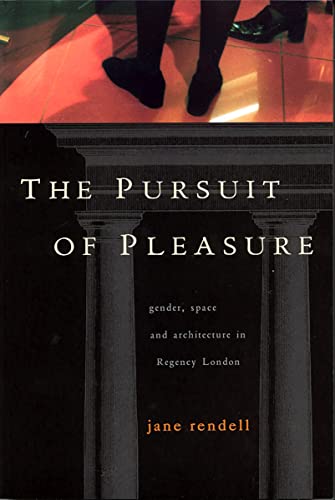 Until recently, architectural historians have focused their attention on buildings financed by wealthy patrons and designed by prestigious architects. Historical analysis has centered on the politics of this architecture and how social class has contributed to the design. Feminist historians have explored the role of women architects, and they have examined how gender difference informs architectural design.

Developing these areas of research, Jane Rendell discusses how gender theory can inform the study of architecture in early nineteenth-century London. She considers the gendering of public space as a complex and shifting series of moves between men and women, constructed and represented through spatial and social relations of consumption, display, and exchange. Drawing on geography, philosophy, and cultural theory, she investigates a number of specific architectural spaces—places of upper-class leisure and consumption in the West End: streets, clubs, assembly rooms, opera houses, and theaters.

In discussing public urban sites and the social exchanges that take place there, Rendell also examines the types of individuals displayed in—or excluded by—these spaces, such as the rambler and the cyprian, precursors to the Parisian flâneur and prostitute. Illustrated with contemporary prints and drawings, The Pursuit of Pleasure is a rich analysis of public space at the birth of the modern metropolis.

Jane Rendell is a lecturer in architecture at University College, London. She is the coeditor of The Unknown City and many other books on architecture.

2. The Pursuit of Pleasure: Gender, Space and Architecture in Regency London