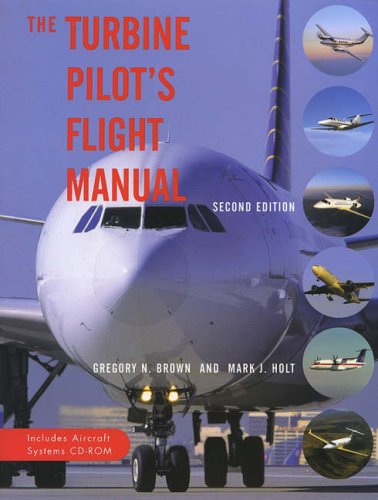 Highly illustrated and clearly written, The Turbine Pilot's Flight Manual is a must have for all pilots. It offers a complete description of turbine aircraft engines and systems including turboprops and jets. Additional chapters on high-speed aerodynamics, multipilot crew co-ordination, wake turbulence and high altitude weather are discussed at length. The book is perfect for not only those involved in pure jet operations; but for those involved in turboprop, multipilot operations, and transition training. It is a key tool for a successful turbine aviation career.

Whether you’re a piston pilot preparing for turbine ground school, a transitioning military pilot boning up for that first corporate or airline interview, or an old pro brushing up on turbine aircraft operations, The Turbine Pilot’s Flight Manual is designed for you. With precision and a sense of humor, authors Greg Brown and Mark Holt cover all the basics, clearly explaining the differences between turbine aircraft and their piston engine counterparts.


In addition to comprehensive descriptions of turbine aircraft engines and all major systems, this manual addresses high-speed aerodynamics, coordinating multipilot crews, wake turbulence, and navigating in high-altitude weather. You’ll be introduced to state-of-the-art cockpit instrumentation including the flight management system (FMS) and the head-up guidance system (HGS or HUD) and learn the operating principles of hazard avoidance systems including weather radar, lighting detectors, and the ground proximity warning system (GPWS), plus much, much more

The authors clarify complex topics with a wealth of illustrations and for the first time include in this edition the multimedia Aircraft Systems CD-ROM (MAC and PC). Now, while reading the book, you can access narrated color to understand. Also included are glossary of airline and corporate aviation terminology, handy turbine pilot rules of thumb, and a comprehensive turbine aircraft Spotter’s Guide.

Greg Brown's love for flying is obvious to anyone who knows his column, "Flying Carpet," in AOPA's Flight Training magazine. Flying since 1971, Greg has found jobs as a pilot for both corporate and scheduled flight operations, and helped countless aviators achieve their career dreams through writing and seminars. He holds an ATP pilot certificate with Boeing 737 type rating and was 2000 National Flight Instructor of the Year. Other popular books by Greg Brown include The Turbine Pilot's Flight Manual and The Savvy Flight Instructor.
Mark J. Holt, a pilot for a major airline based in Atlanta, holds a ATP pilot certificate with Boeing 757/767 and BAe Jetstream 41 type ratings, a flight engineer (Turbojet) certificate, along with numerous flight and ground instructor ratings. His professional flying career includes extensive flight and ground instructing experience and service as a check airman for a large regional airlin. Mr. Holt also served nine years as an electronics/radar technician for the U.S. Air Force Air National Guard.