Items related to Auden and Documentary in the 1930s

Bryant, Marsha Auden and Documentary in the 1930s

Auden and Documentary in the 1930s 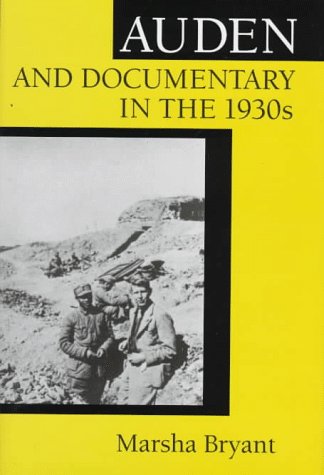 W.H. Auden established his literary reputation in a decade framed by economic depression and global war. He emerged as the defining literary voice of the 1930s while the documentary genre emerged as the decade's principal discourse of social reality. In Auden and Documentary in the 1930s, Marsha Bryant examines this cultural convergence to challenge standard assumptions about socially engaged art. Restoring to Auden's canon the commentaries he wrote for documentary films and the photographs he published in his documentary travelogues, she considers the decade's interplay of visual and literary texts.

The 1930s continue to provide our dominant models of socially engaged art, especially through the documentary genre. In Auden's alternative documentary texts, Bryant reveals, the 1930s can also suggest new models of representation. This multilayered study should appeal to scholars of film studies, modernism, cultural studies, and gay studies, as well as to Auden's legions of fans.

Marsha Bryant is Associate Professor of English at the University of Florida and the editor of Photo-Textualities: Reading Photographs and Literature.