Items related to The Black Aesthetic Unbound: Theorizing the Dilemma... 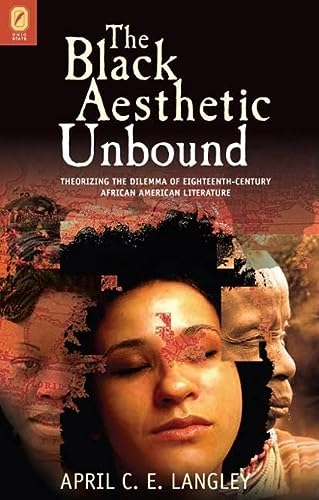 During the era of the slave trade, more than 12 million Africans were brought as slaves to the Americas. Their memories, ideas, beliefs, and practices would forever reshape its history and cultures. April C. E. Langley’s The Black Aesthetic Unbound exposes the dilemma of the literal, metaphorical, and rhetorical question, "What is African in African American literature?" Confronting the undeniable imprints of West African culture and consciousness in early black writing such as Olaudah Equiano’s The Interesting Narrative or Phillis Wheatley’s poetry, the author conceives eighteenth-century Black Experience to be literally and figuratively encompassing and inextricably linked to Africa, Europe, and America.Consequently, this book has three aims: to locate the eighteenth century as the genesis of the cultural and historical movements which mark twentieth-century black aestheticism—known as the Black Aesthetic; to analyze problematic associations of African identity as manifested in an essentialized Afro-America; and to study the relationship between specific West African modes of thought and expression and the emergence of a black aesthetic in eighteenth-century North America. By exploring how Senegalese, Igbo, and other West African traditions provide striking new lenses for reading poetry and prose by six significant writers, Langley offers a fresh perspective on this important era in our literary history. Ultimately, the author confronts the difficult dilemma of how to use diasporic, syncretic, and vernacular theories of Black culture to think through the massive cultural transformations wrought by the Middle Passage.

“April Langley persuasively argues that scholars of African American literary history cannot divorce from their work any one of the three elements of the coherent tripartite world made up of Africa, Britain, and British North America.” —Joycelyn Moody, editor of African American Review and Sue E. Denman Distinguished Chair in American Literature at the University of Texas at San Antonio