Items related to Nameless, Blameless, and Without Shame: Two Cannibal...

Nameless, Blameless, and Without Shame: Two Cannibal Mothers Before a King (Interfaces series) 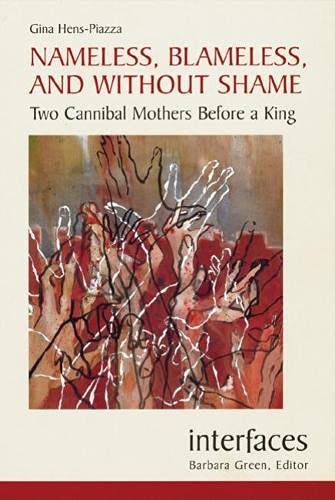 Nameless, Blameless, and Without Shame is a character study of two obscure women before a king (2 Kings 6:24 33). It explores the violence encoded in the texts by the privileged powerful. The character study connects these cannibal mothers to portraits of other pairs of biblical mothers and their plight the two mothers before Solomon, Sarah and Hagar, Rachel and Leah. This prompts us to search for counter-stories in the biblical tradition and in our own lives opposing the violence embedded there. The text and the tradition of interpretation would urge us to disregard, scorn, or even indict these two women and all they represent. However, the character analysis emerging out of this literary assessment argues in favor of elevating these nameless mothers as blameless.
Chapters are "Building Character," A Story Within Stories, Literary Criticism and the Tale of Two Cannibal Mothers, A Postmodern Literary Study of Two Cannibal Mothers Before a King, Stories Speak of Other Stories, and Character, Counter Texts, and Conclusion.

Gina Hens-Piazza, PhD, is an associate professor of biblical studies at the Jesuit School of Theology at the Graduate Theological Union in Berkeley. She has written and lectured extensively on topics of literary studies, women, and social justice in relation to biblical texts.

Hens-Piazza offers readers an entry not only to the story of the two women, but she also gives readers a lens with which to view the violence that is a part of many biblical narratives and the violence of our world-violence that creates new victims every day. She employs the methods of post-modern literary criticism and feminist hermeneutics, and she shows what these offer when used by a creative and insightful reader." ---Catholic Library World

1. Nameless, Blameless, and Without Shame: Two Cannibal Mothers Before a King (Interfaces series)

2. Nameless, Blameless, and Without Shame: Two Cannibal Mothers Before a King (Interfaces series)