Items related to The Alphabet of Desire

The Alphabet of Desire 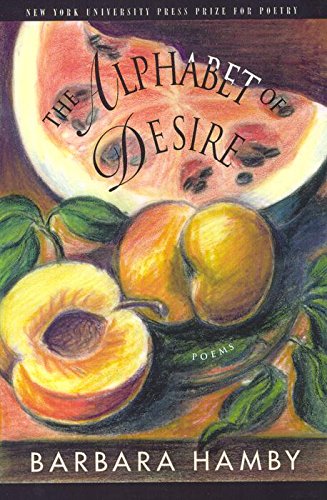 In this sublime and imposing book of poetry, Barbara Hamby races through the circuitous regions of Heaven and Hell, desire and love, giving shape and significance to the strange and the familiar. Her book ignites with a proclamation, "In the beginning was the word, fanning out into syllables, like a deck of cards on a table in Vegas, lovely leafy parts fluttering into atoms and cells, genus and phylum, nouns and verbs;" an easy metaphor for her intoxicating linguistic machinations.

Hamby's roaming, inquisitive mind reels in the reader, "I'm persuaded the day will come when I'll lie static as a falcon in a hunter's sack, fragments of iron studding my reckless breast." Not limited to the self-referential, Hamby playfully references historic and literary personae, taking stabs at Shakespeare, Jane Austen, the Bible and Casanova. "Who wouldn't," she challenges us, "give anything for the voice of an angel and wings to fly above the rough dirt of birth?"

Barbara Hamby has been published in many literary magazines and is the editor of Apalachee Quarterly and director of Apalachee Press. Her first published collection, Delirium, won the 1994 Vassar Miller Prize, the 1996 Kate Tufts Discovery Award and the Poetry Society of America's Norma Farber First Book Award.

paper 0-8147-3598-3 The second collection by the editor of the Apalachee Review is a prizewinner like the first: Delirium (1994) won the Vassar Miller award, and now this ample new volume has been selected for NYUs annual prize. Everything about it is excessive: the lines run on, the poems race all over the place, the sensibility embraces all things, and there are just too many poems. Actually, theres lots of poetry here, but few distinctly individual poems; Hamby seldom varies her expressive style, which, at its best, results in energetic, jazzy rhythms, a bebop / babble, that, however, the writer fails to sustain throughout this exhausting book. The greater the risks she takes, the greater her flops: With Sonya, a poem about movie-going, digresses on Roman Polanski (he shouldnt fuck thirteen-year-old girls), and poems addressing world-historical events unintentionally recall Mel Brooks, especially the tasteless Springtime for Hitler bit in Reichsfhrer Blues, a way-too casual and self-assured poem about the Holocaust and human disaster: Heave ho, heave ho, its off to bake you go . . . . Hamby piles on nouns and adjectives with no concern for synonymy: her logorrheic effusions and her rhumba / with the infinite find her ranting and raving, often about her own neuroses. The dullest poems simply celebrate the poets husband: him sleeping beside her (Beriberi); her hugging Mr.Pillow when hes away; him among beautiful students (The Dream of the Red Drink); him as samurai and warlord (Irony Waltz), and so on. A mid-section of poems is arranged somewhat pointlessly as an abcedarium, and 13 Italian odes only show off the writers limited foreign vocabulary. Provocative, and at times plain silly, Hambys verse bombards us with its expansiveness. -- Copyright ©1999, Kirkus Associates, LP. All rights reserved.

The Alphabet of Desire