Items related to Leif the Lucky 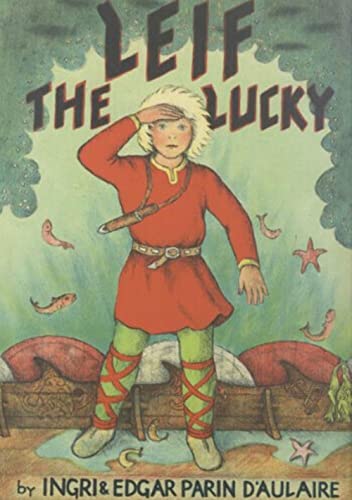 Considered one of the finest works of Ingri and Edgar Parin d’Aulaire, Leif the Lucky will delight both children and adults with the story of Leif, son of Erik the Red, who sailed with his father and a Viking crew to Greenland and then farther west to the continent of America.

In this charming and lavishly illustrated edition, Leif is a sturdy, adventurous Viking boy who crosses uncharted seas to arrive at “a beautiful land with forests of strange trees growing all the way down to the shores.” Leif wrestles with polar bear cubs, watches the fierce Norse gods race in the glow of the Northern Lights, and becomes a strong and courageous hunter.

Written in the spirit of the ancient sagas and rich in color and detail, Leif the Lucky is a fascinating biography of the young Viking explorer.

Known for their vibrant and imaginative interpretations of Scandinavian folklore, Greek and Norse mythology, and American history, the books of Ingri and Edgar Parin d’Aulaire have entertained readers for more than seventy-five years.