Items related to Shattering the Myth of Race: Genetic Realities and...

Shattering the Myth of Race: Genetic Realities and Biblical Truths 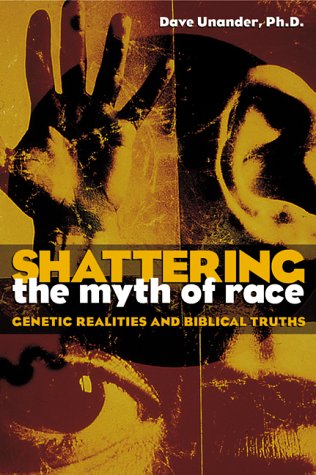 Does "race" really matter? Seeking to establish that human beings are overwhelmingly similar when it comes to genetic make-up, Unander, an honored geneticist, argues that the term "race" implies greater differences among groups of human beings than is supported by the genetic evidence. Exploring the history of how science has been abused to justify racism, this astonishing new book weaves together science and history to offer foundations for biblical and theological perspectives on questions of "race." Unander's goal is to increase the reader's appreciation, both theologically and scientifically, for the unity of all humanity.

Unander teaches at Eastern College in the biology department and in the graduate program in economic development. He holds a Ph.D. from the University of Minnesota.

What do current genetic research and the biblical message have in common? Much more than a brain teaser, this question is the basis of Unander's brief but provocative book about human identity. A teacher of both biology and economic development at Eastern College, Unander applies his intellectual versatility to the question of racism, arguing "on the basis of the latest genetic research, as well as Scripture" the meaninglessness of race as a category of human identity. Instead, Unander calls us to encounter one another within God's category as creatures bearing the image of God. What is striking about Unander's account is the range of perspectives he has woven through it. From his childhood experiences of race on the south side of Chicago, Unander moves to ancient philosophical foundations for slavery and to the fight against racism mounted by the abolitionist and civil rights movements in the United States. Four full chapters of nine consider the "bad science" of racial inequality and how the latest genetic research might underscore the biblical understanding of humanity as diversity within a single human race. While his argument from genetics may get too technical at times for the lay reader, and his history of racism is a bit whirlwind, Unander does a fine job of introducing the intersection of genetics and Scripture. His passion for the story he tells "and it is as much story as argument" makes this book well worth reading. (Dec.)
Copyright 2000 Reed Business Information, Inc.

1. Shattering the Myth of Race: Genetic Realities and Biblical Truth

2. Shattering the Myth of Race: Genetic Realities and Biblical Truths