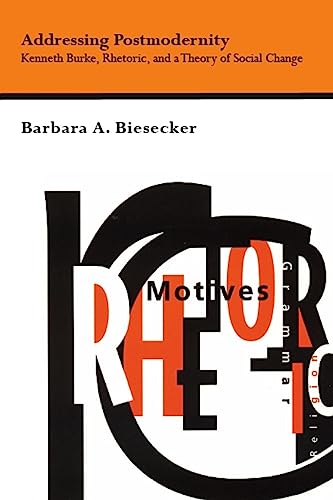 In Addressing Postmodernity, Barbara Biesecker examines the relationship between rhetoric and social change and the ways human beings transform social relations through the purposeful use of symbols. In discerning the conditions of possibility for social transformation and the role of human beings and rhetoric in it, Biesecker turns to the seminal work of Kenneth Burke.

Through a close reading of Burke's major works, A Grammar of Motives, A Rhetoric of Motives, and The Rhetoric of Religion: Studies in Logology, the author addresses the critical topic of the
fragmentation of the contemporary lifeworld revealing postmodernity will have a major impact on Burkeian scholarship and on the rhetorical critique of social relations in general.

Directly confronting the challenges posed by postmodernity to social theorists and critics alike and juxtaposing the work of Burke and Jurgen Habermas, Biesecker argues that a radicalized rereading of Burke's theory of the negative opens the way toward a resolutely rhetorical theory of social change and human agency.

Barbara Biesecker is professor of communication studies at the University of Georgia.

“Addressing Postmodernity is an example of how rhetoric and cultural studies might be combined to develop the kind of social theory that will be necessary to sustain us in the years ahead.”—John Louis Lucaites, Indiana University

“Biesecker reveals Burke's energy and originality and her own talent in bringing understanding and significance to his theories. This volume is also a pragmatic application for postmodern societal fragmentation. . . . An important source for rhetoricians, philosophers, and sociologists, this book will become a classic interpretation of Kenneth Burke's works.”—CHOICE