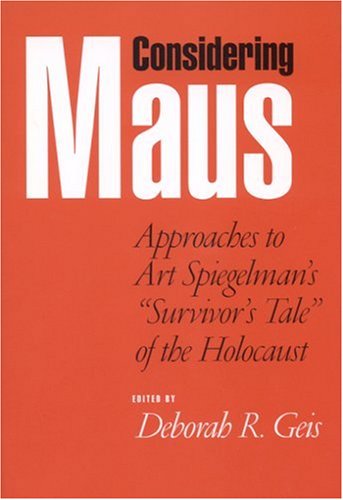 “Highlights include a discussion of Steven Spielberg’s An American Tail (1986), an animated film that borrowed Spiegelman’s cat and mouse Jew/Jew-hater motif, and

Michael Rothberg’s strong discussion of the problems of turning the Maus theme into a commodity, ‘dangers that the artist recognizes in mass-marketing death,’ and the Holocaust’s resistance to representation. . . . Recommended.”—Choice

“New and previously published essays on the American writer’s two-volume illustrated novel, which depicts his father’s wartime and postwar experiences as a Holocaust
survivor.”—Chronicle of Higher Education

“[This book] reminds the interested reader of the rich interand intra-textual web of visual, graphic, aural, textual, and literal signifiers that make the Maus volumes unique and endlessly compelling.”—Holocaust and Genocide Studies

Book Description University Alabama Press, 2003. Hardcover. Condition: Good. Connecting readers with great books since 1972. Used books may not include companion materials, some shelf wear, may contain highlighting/notes, may not include cdrom or access codes. Customer service is our top priority!. Seller Inventory # S_264489323

Book Description University Alabama Press, 2003. Hardcover. Condition: Good. Item may show signs of shelf wear. Pages may include limited notes and highlighting. May include supplemental or companion materials if applicable. Access codes may or may not work. Connecting readers since 1972. Customer service is our top priority. Seller Inventory # mon0002075428

Book Description University Alabama Press, 2003. Condition: Good. A+ Customer service! Satisfaction Guaranteed! Book is in Used-Good condition. Pages and cover are clean and intact. Used items may not include supplementary materials such as CDs or access codes. May show signs of minor shelf wear and contain limited notes and highlighting. Seller Inventory # 0817313761-2-4