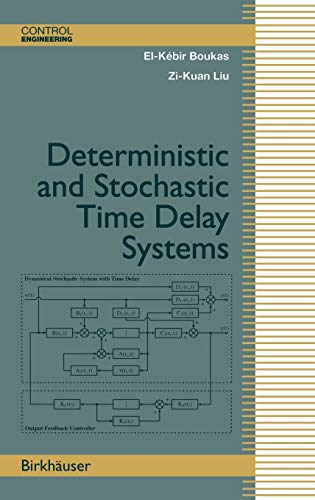 Most practical processes such as chemical reactor, industrial furnace, heat exchanger, etc., are nonlinear stochastic systems, which makes their con­ trol in general a hard problem. Currently, there is no successful design method for this class of systems in the literature. One common alterna­ tive consists of linearizing the nonlinear dynamical stochastic system in the neighborhood of an operating point and then using the techniques for linear systems to design the controller. The resulting model is in general an approximation of the real behavior of a dynamical system. The inclusion of the uncertainties in the model is therefore necessary and will certainly improve the performance of the dynamical system we want to control. The control of uncertain systems has attracted a lot of researchers from the control community. This topic has in fact dominated the research effort of the control community during the last two decades, and many contributions have been reported in the literature. Some practical dynamical systems have time delay in their dynamics, which makes their control a complicated task even in the deterministic case. Recently, the class ofuncertain dynamical deterministic systems with time delay has attracted some researchers, and some interesting results have been reported in both deterministic and stochastic cases. But wecan't claim that the control problem ofthis class ofsystems is completely solved; more work must be done for this class of systems.

"...the book is in my opinion especially suited to people who already work in the field of delay equations and want to have a good understanding of the Lyapunov approach and to people who are familiar with Lyapunov based control methods for systems without delay and are interested in the extension to time-delay systems. ...The book ends with some appendices, which provide the necessary background to make the book self-contained. Especially the first appendix is interesting, since it not only introduces the reader to linear matrix inequalities, but also explains with some examples how the latter can be numerically solved with the Matlab® LMI toolbox." ―Bulletin of the Belgian Mathematical Society

"The monograph is devoted to problems of stability and stabilization of systems with deviating arguments. It consists of two parts. The first part considers deterministic systems.... The second part of the monograph is devoted to similar problems for stochastic systems.... Each section has numerous examples that illustrate the results of the obtained theorems. The monograph can be useful for solving concrete problems of stabilization and control theory. Examples of such problems are given at the beginning of the book." ―Zentralblatt Math

"The book is structured into two parts [Part I: Deterministic Control; Part II: Stochastic Control]. The Introduction presents some dynamical time-delay systems and gives the notations used in the book, states the problems and the difference between the two systems under discussion.... Different design algorithms for state feedback are proposed.... The LMI framework is used in all problems.... [S]everal appendices are included to make the book self-contained. Most of the results are illustrated by numerical examples, solved with the LMI Matlab toolbox. This book can be used either as a text for graduate students in engineering or as a reference for practicing control engineers, graduate students and researchers in control engineering." ―Applications of Mathematics