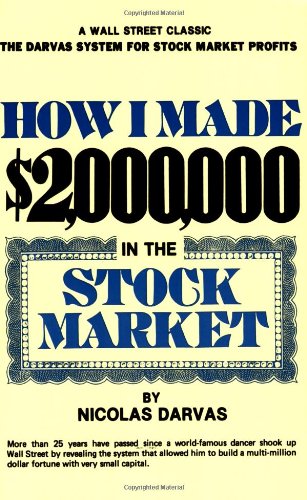 Hungarian by birth, Nicolas Darvas trained as an economist at the University of Budapest. Reluctant to remain in Hungary until either the Nazis or the Soviets took over, he fled at the age of 23 with a forged exit visa and fifty pounds sterling to stave off hunger in Istanbul, Turkey. During his off hours as a dancer, he read some 200 books on the market and the great speculators, spending as much as eight hours a day studying. Darvas invested his money into a couple of stocks that had been hitting their 52-week high. He was utterly surprised that the stocks continued to rise and subsequently sold them to make a large profit. His main source of stock selection was Barron's Magazine. At the age of 39, after accumulating his fortune, Darvas documented his techniques in the book, How I Made $2,000,000 in the Stock Market. The book describes his unique "Box System", which he used to buy and sell stocks. Darvas' book remains a classic stock market text to this day.

How did a world-famous dancer with no knowledge of the stock market, or of finance in general, make 2 million dollars in the stock market in 18 months starting with only $10,000? Darvas is legendary, and with good reason. Find out why.