Items related to Thirteen Keys to the Presidency

Thirteen Keys to the Presidency 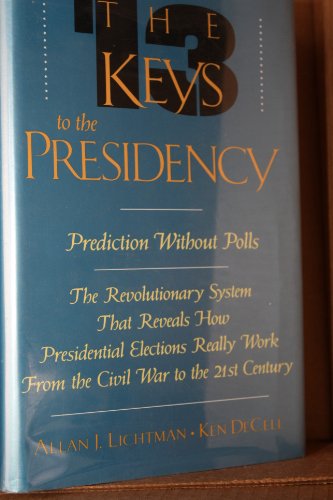 Identifies the factors that forecast the outcome of a presidential election, and discusses what they reveal about American politics

Expanding on his 1980 theory, Lichtman (history, American Univ.) and DeCell, senior editor of The Washingtonian magazine, discuss 13 historical factors (four political "keys," seven performance "keys," and two personality "keys") that they have used to determine the outcome of presidential elections. In the chronological application of these "keys" to the 33 elections since 1860, the authors dispel much of the mystery behind electoral politics and challenge many traditional assumptions. In terms of the theory's early predictive success, comparative method, and the likely controversy that it will generate, the book recalls James David Barber's classic Presidential Character: Predicting Performances in the White House (Prentice Hall, 1985. 3d ed.). While Barber uses psychology to predict the mental health of presidential candidates, Lichtman and DeCell rely on history to predict the winner months before the November election. Whether this is science or sorcery, informed citizens are presented with an entertaining and alternative method to those omnipresent pollsters.
- William D. Pederson, Louisiana State Univ., Shreveport
Copyright 1990 Reed Business Information, Inc.

This intriguing study offers a radical system for determining in advance the winners of American presidential elections, a system integrating historical analysis and mathematical pattern-recognition methods. Examining the circumstances surrounding past elections, Lichtman and DeCell disclose a remarkably consistent set of factors or "keys," which, they believe, can accurately predict outcomes. Describing how the keys were utilized in 1984 and '88, the authors apply the methodology to every presidential election from 1860 on, demonstrating how the same keys appear to account for the major themes and events of 33 consecutive elections. They also discuss misconceptions of presidential politics that their system brings into focus. Lichtman is a history professor at American University in Washington, D.C.; DeCell is an editor at Washingtonian magazine.
Copyright 1990 Reed Business Information, Inc.

2. Thirteen Keys to the Presidency

3. Thirteen Keys to the Presidency