Items related to The Abortion Myth: Feminism, Morality, and the Hard... 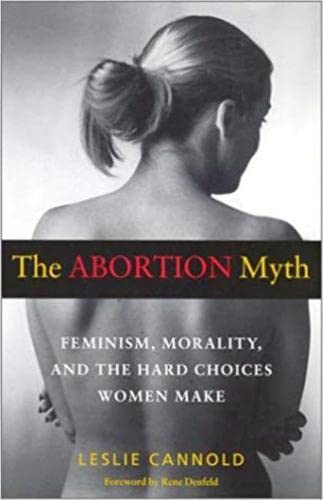 The feminist position on abortion is little changed from thirty years ago, argues Leslie Cannold. Mired in the rhetoric of "rights," feminists have failed to appreciate women's actual experience of abortion and have ceded the debate on the morality of abortion to the anti-choice contingent. In order to counter the current erosion of abortion rights and appeal to women of Generation X, who don't remember a time when abortion wasn't safe and legal, feminism must evolve a richer, more nuanced understanding of abortion, she says, one that is premised on the right to choose, yet sensitive to the value of the fetus and the serious responsibilities of motherhood.

Cannold, an American bioethicist working in Australia, seeks to forge a new ethics of abortion in her groundbreaking book. Drawing on her own study of women's actual experiences of and attitudes toward abortion, she documents the difficult choices women make and the moral and ethical reasoning they bring to bear on the question of abortion, whether they are pro- or anti-choice. In the lived experience of women, she finds a practical ethics of abortion in which termination is not only a moral response to an unplanned pregnancy, it may be the only moral response.

Feminism must develop a new appreciation of what abortion means to women, Cannold argues. Women's right to choose (or reject) motherhood, rather than to "control their bodies," must be at the center of this new approach, as must the responsive, caring relationship between the pregnant woman and her fetus. Such an approach to this volatile issue speaks to the concerns of both pro- and anti-choice advocates, offering a middle ground in an often polarizing debate. Upon her book's publication in Australia, The Bulletin (Australia's weekly news magazine) declared that "a refreshingly forthright and compassionate voice has broken through the rancour and tedium of this benighted controversy." This first American edition, revised and with a new introduction, brings Cannold's new voice and perspective to a new audience.

"The women I interviewed, no matter what side of the abortion fence they were on," writes Leslie Cannold in The Abortion Myth, "were clear that the fetus is alive, and abortion kills it. None of them, however, believed these facts proved that abortion was wrong." Cannold criticizes pro-choice feminists for denying the fetus in an effort to bring the woman back into focus as the locus of pregnancy and the agent of decision-making. In her view, women are moral persons for whom the decision to abort derives less from a sense of rights or privacy and more from a broader evaluation of what the "right" thing to do is. This evaluation speaks to their attitudes towards pregnancy and motherhood, and the real difference between pro- and anti-choice women is their level of trust that other women will "act morally."

Cannold builds on the work of such scholars as Kristin Luker, Faye Ginsburg, and Carol Gilligan, and takes on the controversial work of her own mentor, Peter Singer, on how ectogenesis might affect the abortion decision. Methodologically, The Abortion Myth suffers from some of the same flaws as Gilligan's In a Different Voice--a small, self-selected sample--and Cannold's normative stance is clear throughout. She is, after all, a graduate student and fellow in bioethics. The author is American but does all her work in Australia, and it is certainly fruitful to hear other voices and perspectives coming from a non-U.S. context. The Abortion Myth has been revised and updated for an American audience. Where the original Australian edition was produced as a trade book, this new version, published by a university press consortium, reflects Cannold's desire to engage the enormous academic and political debate that surrounds abortion, especially in the United States. The result is an interesting and thought-provoking read for the sophisticated lay reader. --J.R.