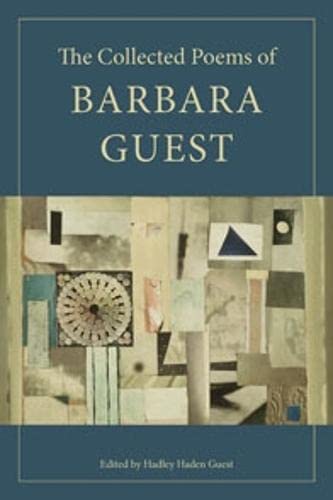 One of the most notable members of the New York School - and its best-known woman - Barbara Guest began writing poetry in the 1950s in company that included John Ashbery, Kenneth Koch, Frank O'Hara, and Tames Schuyler. And from the beginning, her practice placed her at the vanguard of American writing. Guest's poetry, saturated in the visual arts, extended the formal experiments of modernism, and played the abstract qualities of language against its sensuousness and materiality. Now, for the first time, all of her published poems have been brought together in one volume, offering readers and scholars unprecedented access to Guest's remarkable visionary work. The Collected Poems moves from her early New York School years through her more abstract later work, including some final poems never before published. Switching effortlessly from the real to the dreamlike, the observed to the imagined, this is poetry both gentle and piercing - seemingly simple, but truly and beautifully dislocating.

BARBARA GUEST (1920-2006) published over twenty volumes of poetry, and earned awards including the Robert Frost Medal for Distinguished Lifetime Achievement from the Poetry Society of America. HADLEY GUEST is Barbara Guest's daughter. She lives in Berkeley, California. PETER GIZZI is the author of four books of poetry, including The Outernationale (2007). He teaches at the University of Massachusetts, Amherst.

Influenced by the same 1950s abstract art scene that forged the improvisational aesthetics of John Ashbery and other New York School poets, Guest (1920–2006) nevertheless eschewed the overt playfulness and "personism" of her male counterparts for more oblique modes that combined, say, Marianne Moore's painterly visual sense with H.D.'s and Gertrude Stein's concern with conceptual experimentation. Venturesome and exploratory throughout, Guest's work suggested directions for both "language" poetry and the postmodern lyricism that followed it, performing "a drama of exacting dimension" that questioned and refocused familiar poetic forms—lyric, narrative, prose poem—as if they were "composed with magic and euphony." In an insightful introduction, Peter Gizzi notes that Guest's poems "evoke the joy of being found," and the appearance of this omnibus, gathering the contents of Guest's published volumes from The Location of Things (1960) through The Red Glaze (2005), offers a grand occasion for that discovery. Recommended for most collections.—Fred Muratori, Cornell Univ. Lib., NY
Copyright © Reed Business Information, a division of Reed Elsevier Inc. All rights reserved.

Book Description Wesleyan University Press. Hardcover. Condition: Good. 0819568600 Bumped and creased book with tears to the extremities, but not affecting the text block and a remainder mark to one edge - Good. Seller Inventory # Z0819568600Z3

Book Description Wesleyan University Press, 2008. Condition: Good. A+ Customer service! Satisfaction Guaranteed! Book is in Used-Good condition. Pages and cover are clean and intact. Used items may not include supplementary materials such as CDs or access codes. May show signs of minor shelf wear and contain limited notes and highlighting. Seller Inventory # 0819568600-2-4