Items related to Threefold Paradise of Cotton Mather: An Edition of...

Threefold Paradise of Cotton Mather: An Edition of "Triparadisus"

Threefold Paradise of Cotton Mather: An Edition of "Triparadisus" 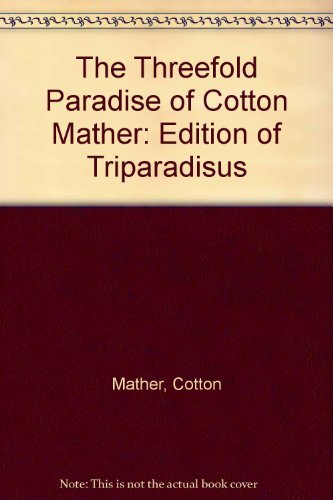 No other American Puritan has fueled both the popular and academic imagination as has Cotton Mather (1663-1728). Colonial America's foremost theologian and historian, Mather was also one of its most powerful voices advocating millennialism. His lifelong preoccupation with this subject culminated in his definitive treatise, "Triparadisus" (1726/1727), left unpublished at his death. In it, Mather justified his ideological revisionism; his response to the philological, historical, and scientific challenges of the Bible as text by English and continental deists; and his hermeneutical break from the orthodox exegeses of his father, Increase Mather, and Joseph Mede.
In his critical introduction to this edition of "Triparadisus," Reiner Smolinski demonstrates that Mather's hermeneutical defense of revealed religion seeks to negotiate between the orthodox literalist position of his New England forebears and the new philological challenges to the scriptures by Hugo Grotius, Thomas Hobbes, Isaac de La Peyrere, Benedict de Spinoza, Richard Simon, Henry Hammond, Thomas Burnet, William Whiston, Anthony Collins, and Isaac Newton. In "Triparadisus" Mather's hermeneutics undergoes a radical shift from a futurist interpretation of the prophecies to a preterite position as he joins the quasi-allegorical camp of Grotius, Hammond, John Lightfoot, and Richard Baxter.
The Threefold Paradise of Cotton Mather also challenges a number of longstanding paradigms in the scholarship on American Puritanism, history, literature, and culture. Smolinski specifically calls into question the consensus among intellectual historians who have traced the Puritan origin of the American self to the Errand into the Wilderness and the idea of God's elect. He also challenges the commonplace argument that New England represented the culmination of prophetic history in an American New Jerusalem for the Mathers and their counterparts.
As an important link between Mather's premillennialism in the late seventeenth century and Jonathan Edwards's postmillennialism in the Great Awakening, "Triparadisus" provides important biographical insight into Mather's last years, when, liberated from his father's interpretations, he put forward his own.

Reiner Smolinski is an associate professor of English at Georgia State University.

1. The Threefold Paradise of Cotton Mather: An Edition of 'Triparadisus'