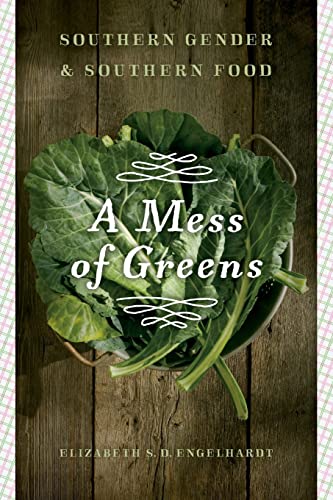 Shaken by the legacies of Reconstruction and the turmoil of the Jim Crow era, different races and classes came together in the kitchen, often as servants and mistresses but also as people with shared tastes and traditions. Generally focused on elite whites or poor blacks, southern foodways are often portrayed as stable and unchanging―even as an untroubled source of nostalgia. A Mess of Greens offers a different perspective, taking into account industrialization, environmental degradation, and women’s increased role in the work force, all of which caused massive economic and social changes. Engelhardt reveals a broad middle of southerners that included poor whites, farm families, and middle- and working-class African Americans, for whom the stakes of what counted as southern food were very high.

Five “moments” in the story of southern food―moonshine, biscuits versus cornbread, girls’ tomato clubs, pellagra as depicted in mill literature, and cookbooks as means of communication―have been chosen to illuminate the connectedness of food, gender, and place. Incorporating community cookbooks, letters, diaries, and other archival materials, A Mess of Greens shows that choosing to serve cold biscuits instead of hot cornbread could affect a family’s reputation for being hygienic, moral, educated, and even godly.

ELIZABETH S. D. ENGELHARDT is a professor of American studies and women’s and gender studies at the University of Texas, Austin and is the chair of the Department of American Studies. She is the author of A Mess of Greens: Southern Gender and Southern Food (Georgia) and The Tangled Roots of Feminism, Environmentalism, and Appalachian Literature.

A Mess of Greens is a landmark text for the study of southern foodways. Engelhardt adds immeasurably to the canon of food studies by bringing the best practices of the discipline of American Studies informed by the analysis of feminist studies.

Using a rich blend of American Studies and Feminist methodologies Elizabeth Engelhardt’s A Mess of Greens is nothing short of a rich treasure trove of new revelations on Southern foodways. More than just another history of Southern food negotiations and behaviors, however, this study enriches our understanding of the many hidden culinary contours informing life below and beyond the Mason-Dixon line. With this well-researched and informed study Engelhardt nicely adds to the necessarily expanding discussions on the intersections of food, race, gender, class, region and power. That she explores these issues through the lives of moonshiners, biscuit-and-cornbread makers, and tomato club participants makes this book even more fascinating and engaging reading. There is no doubt that in very short order A Mess of Greens will become required reading for not only the academic classroom but also the food connoisseur and enthusiast alike.

A Mess of Greens. . .provides students of American regional culinary traditions in general and Southern cooking in particular with a fine examination of Southern gender and Southern food.

Engelhardt makes significant progress toward claiming food as a means of studying race, class, gender, and all the facets of southern life that fall under those broad rubrics.

What happens between the covers of the book is surprising . . . In the effort to appear objective in scholarship, few are so honest in their motivations for choosing to write about a particular topic, and Engelhardt’s candour about the autobiographical in the scholarly book is refreshing. Nevertheless, Engelhardt’s methodology is all that the history or literary scholar would expect.

Engelhardt makes strong, compelling observations about the centrality of food in the lives of women and southerners.

Engagingly written and compellingly argued, A Mess of Greens is accessible for general readers, while offering the academic audience a sophisticated analysis of place, food, and gender. This work is an excellent example of the rich possibilities found in food studies, and it makes a significant contribution to women’s, U.S., and southern history.

2. Mess of Greens, A - Southern Gender and Southern Food

3. A Mess of Greens: Southern Gender and Southern Food (Paperback or Softback)

4. A Mess of Greens: Southern Gender and Southern Food

7. A Mess of Greens: Southern Gender and Southern Food

Book Description The University of Georgia Press, 2011. PAP. Condition: New. New Book. Delivered from our UK warehouse in 4 to 14 business days. THIS BOOK IS PRINTED ON DEMAND. Established seller since 2000. Seller Inventory # IQ-9780820340371

9. A Mess of Greens: Southern Gender and Southern Food