Items related to Globalization, Growth, and Poverty: Building an Inclusive... 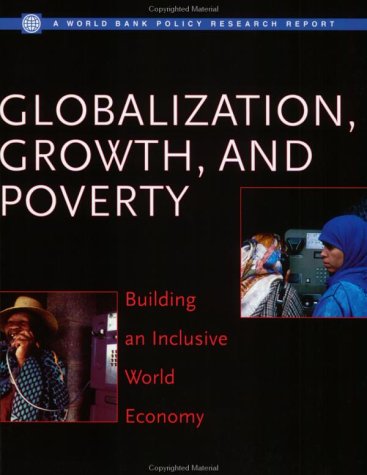 Globalization is already a powerful force for poverty reduction as societies and economies around the world are becoming more integrated. Although this international integration presents considerable opportunities for developing countries, it also contains significant risks. Associated with international integration are concerns about increasing inequality, shifting power, and cultural uniformity.

'Globalization, Growth, and Poverty' focuses on globalization in terms of growing economic integration resulting from the increased flow of goods and services, people, capital, and information. The report is primarily concerned with the effect that this growing integration has on economic growth and poverty reduction. It assesses the impact of globalization and addresses the ensuing anxieties. By focusing on specific policy recommendations, this report proposes an agenda for action aimed at minimizing the risks that globalization potentially generates, while maximizing the opportunities for the poor.

A copublication of the World Bank and Oxford University Press.

A valuable contribution to the ongoing and often heated debate regarding international economic integration. It is comprehensive in scope, and it provides insightful policy proposals that are largely based on World Bank research.... a useful resource for those interested in the benefits of globalization and the distribution of those benefits."--Eastern Economic Review

"A very interesting book offering useful insight into the current policy debate about globalization . A well-documented book of important topical interest. It deserves to be widely read in both the developing and developed worlds."-- South-Eastern Europe Journal of Economics