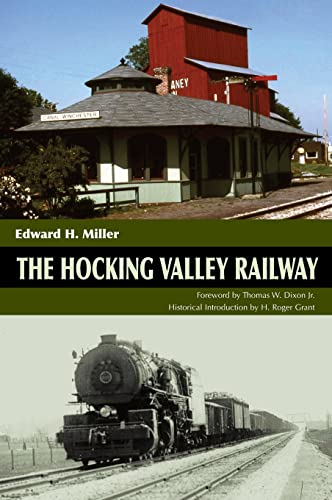 “The first comprehensive history of the Hocking Valley Railway ever published fills a gap in the literature. Miller has written the definitive history of this railroad,” says Richard Francaviglia, author of Hard Places: Reading the Landscape of America's Historic Mining Districts. The Hocking Valley Railway was once Ohio's longest rail line, filled with a seemingly endless string of coal trains. Although coal was the main business, the railroad also carried iron and salt-and kept the finest passenger service in the State of Ohio. Despite the fact that the Hocking Valley was such a large railroad, with a huge economic and social impact, very little is known about it.The Hocking Valley Railway traces the journey of a company that began in 1867 as the Columbus and Hocking Valley, built to haul coal from Athens to Columbus. Extensions of the line and consolidation of several branches ultimately created the Columbus, Hocking Valley and Toledo. This was a 345-mile railway, extending from the Lake Erie port of Toledo through Columbus, and on to the Ohio River port of Pomeroy. The history of the Hocking Valley, as with other railroads, is one of boom times and depression. By the 1920s, the Hocking fields were largely depleted, and the mass of track south of Columbus became a backwater, while the Toledo Division boomed. The corporate name has been gone for more than three quarters of a century, but the Hocking Valley lives on as an integral part of railroad successor CSX. Historians and railroad enthusiasts will find much to savor in the story of this ever-changing company and the managers who ran it. The Hocking Valley Railway, complete with more than 150 photographs and illustrations, also documents a historic transformation in Midwest transportation from slow canalboats to speedy railcars.The author, Edward H. Miller is retired from Hocking Valley successor CSX. This is his first book, which has been over thirty years in the making.

Edward H. Miller is retired from Hocking Valley successor CSX. This is his first book, which has been over thirty years in the making.