Items related to The Wright Company: From Invention to Industry

Roach, Edward J. The Wright Company: From Invention to Industry

The Wright Company: From Invention to Industry 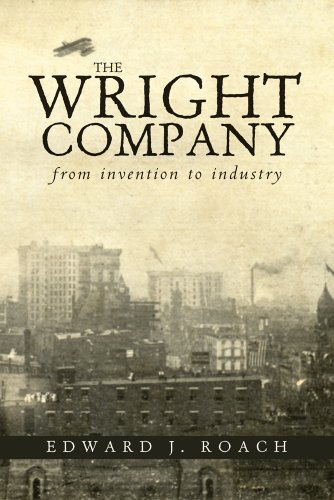 Fresh from successful flights before royalty in Europe, and soon after thrilling hundreds of thousands of people by flying around the Statue of Liberty, in the fall of 1909 Wilbur and Orville Wright decided the time was right to begin manufacturing their airplanes for sale. Backed by Wall Street tycoons, including August Belmont, Cornelius Vanderbilt III, and Andrew Freedman, the brothers formed the Wright Company. The Wright Company trained hundreds of early aviators at its flight schools, including Roy Brown, the Canadian pilot credited with shooting down Manfred von Richtofen—the “Red Baron”—during the First World War; and Hap Arnold, the commander of the U.S. Army Air Forces during the Second World War. Pilots with the company’s exhibition department thrilled crowds at events from Winnipeg to Boston, Corpus Christi to Colorado Springs. Cal Rodgers flew a Wright Company airplane in pursuit of the $50,000 Hearst Aviation Prize in 1911.

But all was not well in Dayton, a city that hummed with industry, producing cash registers, railroad cars, and many other products. The brothers found it hard to transition from running their own bicycle business to being corporate executives responsible for other people’s money. Their dogged pursuit of enforcement of their 1906 patent—especially against Glenn Curtiss and his company—helped hold back the development of the U.S. aviation industry. When Orville Wright sold the company in 1915, more than three years after his brother’s death, he was a comfortable man—but his company had built only 120 airplanes at its Dayton factory and Wright Company products were not in the U.S. arsenal as war continued in Europe.

Edward Roach provides a fascinating window into the legendary Wright Company, its place in Dayton, its management struggles, and its effects on early U.S. aviation.

“[Roach] closes a major gap in our understanding of the brothers, drawing on an untapped cache of corporate records and the scattered papers of business associates to produce a history of the Wright Company set in the larger context of American business, labor, urban, and industrial history. His book is a fresh, honest, and well-researched view of Wilbur and Orville’s experience as the president and vice president of the Wright Company, respectively, detailing the rise and fall of a firm that in different hands might have dominated an infant industry.”—Business History Review

“The Wrights were excellent self-taught engineers who achieved success through a process more akin to tinkering than systematic research and development. They were poor businessmen, however, as this fine discussion of their stint as ‘captains of industry’ illustrates.”—American Historical Review

“Roach has produced what will become the standard work on the subject, and The Wright Company deepens our understanding of early American aviation history in several valuable ways. ...General readers interested in these aspects of twentieth-century transport and aviation history will benefit from reading Roach’s work, as will specialists.”—Journal of Transport History

“As a specialist in the history of flight for over the past 30 years, I thought I had encountered everything there was to know about the Wright Brothers and their essential role in the birth and development of the airplane and the Americanaircraft industry. I was wrong. Edward J. Roach’s new book fills in many gaps in the story where none of us knew there even were gaps. This new study is a major contribution to aviation historiography.”—James R. Hansen, New York Times bestselling author of First Man: The Life of Neil A. Armstrong

“The Wrights were excellent self-taught engineers who achieved success through a process more akin to tinkering than systematic research and development. They were poor businessmen, however, as this fine discussion of their stint as ‘captains of industry’ illustrates.” —American Historical Review

2. The Wright Company: From Invention to Industry

4. The Wright Company: From Invention to Industry