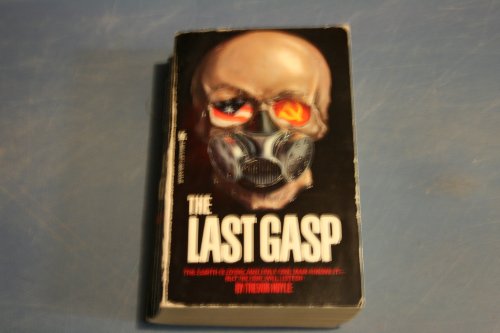 Marine biologist Gavin Chase deciphers the mysterious message of a seemingly crazed Russian scientist, and, teamed with biologist Cheryl Detrick, tries desperately to foil the superpowers' plans for environmental war, plans that include total destruction of the biosphere

Trevor Hoyle was born in Lancashire, and started out as an actor before moving to the other side of the screen as a full-time writer. His award-winning short fiction and novels range from hard-edged thrillers to comedy to science fiction, including his most recent blockbuster, the eco-thriller The Last Gasp. He has also written for the radio (his first radio play, GIGO, won the Radio Times Drama Award) and TV, including the cult TV series Blake's 7; his bestselling novelisations include Blake's 7, which he co-wrote with Terry Nation, the show's creator, followed by Blake's 7: Project Avalon and Blake's 7: Scorpio Attack. His novel Rule of Night was a Time Out Book of the Week. He's also won the Transatlantic Review Erotic Fiction Award and the Ray Mort Northern Novel Award. After travelling the world, he returned to his roots, and once again lives in Lancashire.

Climate thrillers, let alone good ones, are few and far between ... That's why The Last Gasp is a minor revelation * SciFiNow * The Last Gasp is an immersive apocalyptic science fiction horror thriller that is next to impossible to put down * A Bookish Blog * A prophet of ecological apocalypse and chronicler of imminent chaos . . . an enormously entertaining book * Morning Star * The book is epic . . . At 700 pages it's a mighty tome - and the science, may leave the reader, also gasping for breath. * Starburst Magazine * The Last Gasp by Trevor Hoyle is my risk analysis disaster science fiction book standard of excellence . . . Bizarre and intriguing events, catastrophic consequences, and solutions . . . Engaging. * Michael R Greenberg, Explaining Risk Analysis * If someone had told me I'd find a 722 page novel about climate change and pollution as engrossing as a James Bond novel, I'd have thought they were mad. However Trevor Hoyle's The Last Gasp does just that * Horror Hot House * The author's deftness with character, plot and the conventions of the thriller form is vital to a book of this length and complexity. It maintains narrative momentum and encourages the reader to get to grips with the science behind the story * The Morning Star * Trevor Hoyle has combined Dr Strangelove and Raiders of the Lost Ark and come up with a formula that works like a poisoned charm * New York Daily News * This terrifying vision of the possible near future convincingly shows how drastically things could change in a single generation. A riveting ecological thriller that will have you sighing with relief that it all isn't true - yet * Publisher's Weekly * Superb dialogue, vivid imagination and wry humour . . . The Last Gasp is a landmark in the field of eco-fiction * Washington Post *