Items related to A Match For Papa (Zebra Regency Romance) 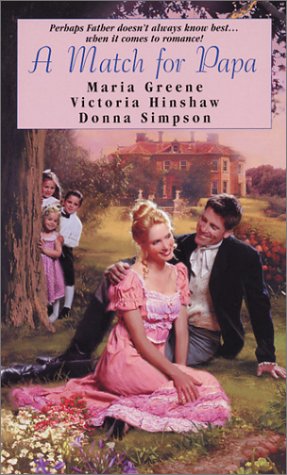 “...a treat for lovers of gothic romance...” “There's a natural progression here from the traditional gothic of eerie occurrences with rational explanations to a true paranormal twist, and Simpson keeps the sultry sensuality at a strong simmer.” Nina Davis - American Library Association.

National bestselling novelist Donna Lea Simpson has written and published 28 novels and novellas. She has written Regency, time-travel, contemporary and paranormal-historical romances, as well as plunging into her long-time love, mystery writing. The first of her paranormal historical books for Berkley, Awaiting The Moon, (February 2006) became a national bestseller and was nominated for Best Paranormal Historical of 2006 by Romantic Times. The follow-up, Awaiting The Night, (November 2006) was also well-received; Harriet Klausner calls it “a wonderful historical that is a one sitting read.” Romantic Times says, “Victoria Holt would be proud.”

Awaiting The Fire (September 2007) continues the series with a scorching tale of paranormal twists, gothic mystery, danger and love set in the Cornish moors.