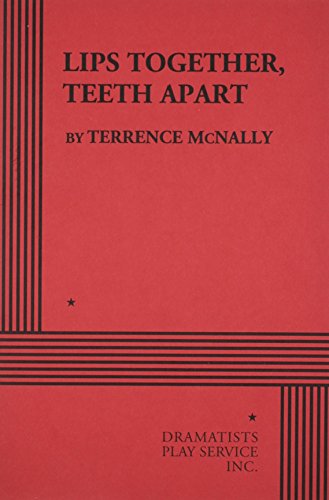 For a 2 man, 2 woman cast. A gay community in Fire Island provides an unlikely setting for two straight couples who are discovered lounging poolside, staring out to sea. Sally, married to Sam, a New Jersey contractor, has inherited the house from her brother who died of AIDS. Sam's hyperkinetic sister, Chloe, and her smug, aristocratic husband, John, have come out for the Fourth of July weekend. Amidst the seemingly mundane activities, it becomes apparent that the two men despise each other because John has had an affair with Sally; Sally is panicked and melancholy because she is pregnant and fears miscarriage; and Chloe seems determined to drive them all mad with her incessant babble and enthusiasm for musical comedies. Through monologues unheard by the others, the characters reveal a desperate sense of individual isolation. The only people these four characters find more alien are the gay men partying in the houses on either side of them. As they divert themselves from their own mortality with food, cocktails, The New York Times crossword puzzle, fireworks, charades, and biting jabs at each other and the boys next door, Sally and Sam and John and Chloe find little to celebrate about themselves or their country on its birthday.

Take two heterosexual couples and surround them with gay vacationers at Fire Island on the Fourth of July. What could go wrong? Find out in playwright Terrence McNally's masterful dark comedy which brings to life ghosts of the past as it lays bare secrets of the heart. If you love plays that walk a fine line between laugh-out-loud comedy and truth-telling drama, this one is for you!

Directed by Bart DeLorenzo. Recorded by L.A. Theatre Works before a live audience at the James Bridges Theater, UCLA School of Theater, Film and Television in December 2012.

Terrence McNally is the author of numerous plays, including Love! Valour! Compassion! (winner of the Tony Award for best play), The Ritz, and Frankie and Johnny in the Claire de Lune, which was made into a feature film starring Al Pacino and Michelle Pfeiffer, and the books for the musicals The Rink, and Kiss of the Spider Woman (winner of the Tony Award for the best book of a musical). Other successes include Lips Together, Teeth Apart and The Lisbon Traviata. McNally has received two Guggenheim Fellowships, a Rockefeller Grant, and a citation from the American Academy of Arts and Letters. He also serves as vice president for the Dramatists Guild, the national orgainzation of playwrights, composers, and lyricists. He lives in New York City.