Items related to When You Comin' Back Red Ryder?.

Mark Medoff; Medoff, Mark When You Comin' Back Red Ryder?.

When You Comin' Back Red Ryder?. 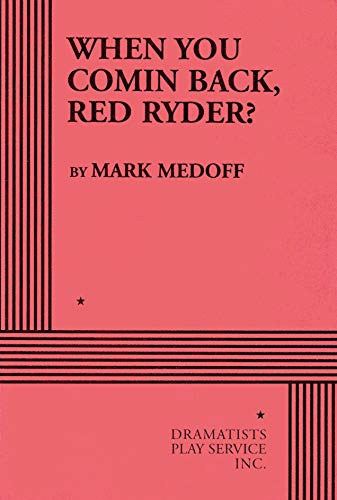 Written for a cast of 5 men and 3 women. The scene is an all-night diner in a sleepy southwestern town, the time early Sunday morning, when the night attendant, young Stephen (Red) Ryder, is about to turn his duties over to his daytime counterpart, Angel. Her friend Lyle, who runs the filling station and motel across the road, stops by for breakfast, followed by an affluent young couple en route to New Orleans. With the arrival of another couple, Teddy and Cheryl, the existing calm quickly vanishes. Their car, in which they are smuggling marijuana into California, has broken down, and while they wait for it to be repaired, Teddy begins to taunt and then bully the others in the diner. With black, sardonic humor he gets at each in turn, stripping away their pretensions and exposing their innermost secrets and fears. They are soon his helpless victims, too terrified to resist as he binds and robs them before heading off down the highway, this time alone. In the end the others, after freeing themselves, realize that they have come through their ordeal without serious harm-at least physically. But for each a searing moment of truth has been faced and, in a deeper sense, they know that they have been changed more than they would have the desire, or perhaps courage, to admit.

1. When You Comin' Back Red Ryder?. [Paperback] Mark Medoff and Medoff, Mark