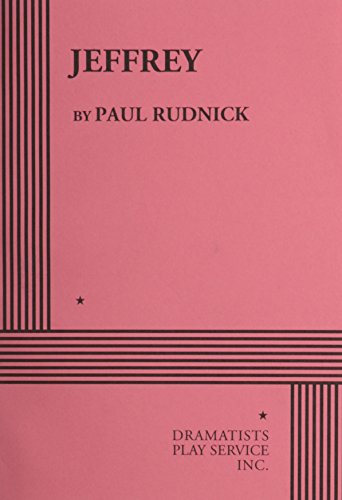 A two act play for 7 males and 1 female. From the publisher's synopsis: "Jeffrey, a gay actor/waiter, has sworn off sex after too many bouts with his partners about what is "safe" and what is not. In gay New York, though, sex is not something you can avoid. Whether catering a ditzy socialite's "how-down for AIDS" or cruising at a funeral; at the gym or in the back rooms of an anonymous sex club; at the annual Gay Pride Parade, or in the libidinous hands of a father-confessor, Jeffrey finds the pursuit of love and just plain old physical gratification to be the number one preoccupation of his times - and the source of plenty of hilarity."

Like so many plays of the last quarter century, the 1993 Obie award winner (for best off-Broadway--hence "Obie"--production) is more an assisted monologue than a developed drama. It's a turn for its title character, a gay man who hails from Wisconsin but lives in New York City, East Coast epicenter of the principal Fury ravaging his kind--AIDS. Jeffrey's reaction to the plague is to give up sex, even though he's been compulsively sexual. But giving up sex means giving up romance, at least in gay New York, and most of the play's often purely fanciful scenes find Jeffrey's friends trying to persuade him that in the midst of death (one of theirs occurs during the play) love endures, so he should give himself to love, which, it's taken for granted, gay men recognize only through sex (although not indiscriminate sex). New York's critics assure us that, played well, Jeffrey is acutely funny; played very well, it should perhaps also be disturbing, something of a Totentanz. Ray Olson