Items related to From Fanatics to Folk: Brazilian Millenarianism and...

From Fanatics to Folk: Brazilian Millenarianism and Popular Culture 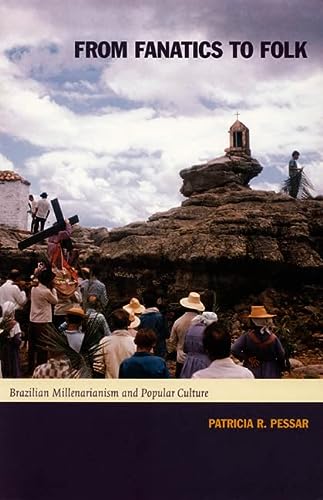 From Fanatics to Folk rejects conventional understandings of Brazilian millenarianism as exceptional and self-defeating. Considering millenarianism over the long sweep of Brazilian history, Patricia R. Pessar shows it to have been both dominant discourse and popular culture—at different times the inspiration for colonial conquest, for backlanders’ resistance to a modernizing church and state, and for the nostalgic appropriation by today’s elites in pursuit of “traditional” folklore and “authentic” expressions of faith. Pessar focuses on Santa Brígida, a Northeast Brazilian millenarian movement begun in the 1930s. She examines the movement from its founding by Pedro Batista—initially disparaged as a charlatan by the backland elite and later celebrated as a modernizer, patriot, and benefactor—through the contemporary struggles of its followers to maintain their transgressive religious beliefs in the face of increased attention from politicians, clergy, journalists, filmmakers, researchers, and museum curators.

Pessar combines cultural history spanning the colonial period to the present; comparative case studies of the Canudos, Contestado, Juazeiro, and Santa Brígida movements; and three decades of ethnographic research in the Brazilian Northeast. Highlighting the involvement of a broad range of individuals and institutions, the cross-fertilization between movements, contestation and accommodation vis-à-vis the church and state, and matters of spirituality and faith, From Fanatics to Folk reveals Brazilian millenarianism as long-enduring and constantly in flux.

"""No one has written to any significant extent on Pedro Batista before this book, and Patricia R. Pessar's detailed explanation of what has become of Batista's movement following his death is fascinating. Her interdisciplinary use of history, anthropology, and political science is exemplary."--Paul J. Vanderwood, author of "The Power of God against the Guns of Government: Religious Upheaval in Mexico at the Turn of the Nineteenth Century"

Patricia R. Pessar is Professor of American Studies and Anthropology at Yale University. She is the author of A Visa for a Dream: Dominicans in the United States and a coauthor of Between Two Islands: Dominican International Migration.

1. From Fanatics to Folk: Brazilian Millenarianism and Popular Culture

2. From Fanatics to Folk: Brazilian Millenarianism and Popular Culture

3. From Fanatics to Folk: Brazilian Millenarianism and Popular Culture