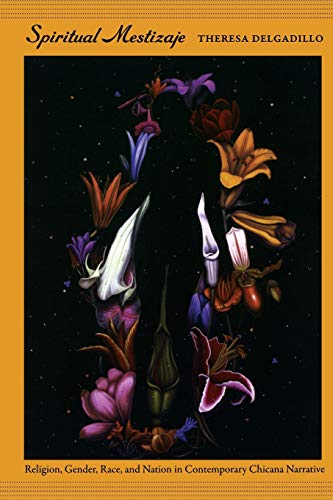 Gloria Anzaldúa’s narrative and theoretical innovations, particularly her concept of mestiza consciousness, have influenced critical thinking about colonialism, gender, history, language, religion, sexuality, spirituality, and subjectivity. Yet Anzaldúa’s theory of spiritual mestizaje has not been extensively studied until now. Taking up that task, Theresa Delgadillo reveals spiritual mestizaje as central to the queer feminist Chicana theorist’s life and thought, and as a critical framework for interpreting contemporary Chicana literary and visual narratives. First mentioned by Anzaldúa in her pioneering book Borderlands/La Frontera, spiritual mestizaje is a transformative process of excavating bodily memory to develop a radical, sustained critique of oppression and renew one’s relation to the sacred. Delgadillo analyzes the role of spiritual mestizaje in Anzaldúa’s work and in relation to other forms of spirituality and theories of oppression. Illuminating the ways that contemporary Chicana narratives visualize, imagine, and enact Anzaldúa’s theory and method of spiritual mestizaje, Delgadillo interprets novels, memoir, and documentaries. Her critical reading of literary and visual technologies demonstrates how Chicanas challenge normative categories of gender, sexuality, nation, and race by depicting alternative visions of spirituality.

“Spiritual Mestizaje offers brilliant readings of some of the most significant Chicana writers and artists of our era. It is indispensible to understanding anew the broad spiritual and social significance of U.S. ethnic cultures. In this book, Theresa Delgadillo lucidly demonstrates how the call for social justice made by contemporary Chicana writers also affirms the imperative for spiritual growth. By examining representations of spirituality in major Chicana literary and filmic texts, Delgadillo deftly considers how religious practices inform transformations of consciousness. She weaves together two central components of Chicana literature to prove that they work in tandem in the continuing quest for respect, equality, and enlightenment.”—Rafael Pérez-Torres, University of California, Los Angeles


“Building on Gloria Anzaldúa’s groundbreaking theory-praxis of spiritual activism, Theresa Delgadillo offers a bold, innovative analysis of the contributions that a politics of spirit can make to critical resistance and individual-collective subject formation. Spiritual Mestizaje should be required reading for anyone interested in contemporary women-of-color theory, postcolonial thought, feminist/womanist studies, religious studies, and/or theology.”—AnaLouise Keating, editor of The Gloria Anzaldúa Reader

“Theresa Delgadillo’s commitment to ‘the social practice of imagination’ carries Chicana/o studies to a new level of maturity through a skillful focus on spiritual mestizaje and social justice as they are inscribed in the work of eight Chicana writers. We travel in literary and spiritual realms where authors have explored with extraordinary inventiveness the ways that people and institutions have struggled to regulate sexualized female bodies. And thankfully, the religious vision of Gloria Anzaldúa now receives its fuller illumination and application in this borderlands of words, feelings, images, and diversities that map a new geography of critical work.”—Davíd Carrasco, Harvard Divinity School

“Delgadillo's study makes a compelling case for the way that Chicana narratives imagine and enact alternative spiritualities, and how those spiritualities can offer new strategies for conceiving of individual and collective subject formation.” (Stella Setka Modern Fiction Studies)

”Delgadillo offers incisive readings of key contemporary Chicana writers and filmmakers, but more importantly she presents a framework for ‘the analysis of religion and spirituality in borderlands Chicana narrative.’ The first chapter is a critical tour de force, developing a theory of spiritual mestizaje, an epistemology in which social justice, spirituality, politics, and narrative form come into play with memory and oppositional history. The author deftly examines the disciplinary points of contact to situate her critical intervention in recent scholarship. . . . Recommended. Lower- and upper-division undergraduates; graduate students; general readers.” (E. Rodriguez y Gibson Choice)

“Spiritual Mestizaje represents a rich and nuanced contribution to the field of Chicano studies as she meticulously uncovers hitherto unexplored facets of spirituality and popular expressions of religiosity as central to gendered processes of identity formation.” (Nuala Finnegan Journal of American Studies)

“[A] timely and groundbreaking contribution to the study of religion." (Karen Mary Davalos Journal of the American Academy of Religion)