The Argentine Silent Majority: Middle Classes, Politics, Violence, and Memory in the Seventies 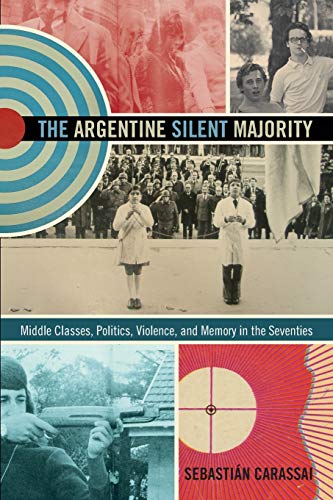 In The Argentine Silent Majority, Sebastián Carassai focuses on middle-class culture and politics in Argentina from the end of the 1960s. By considering the memories and ideologies of middle-class Argentines who did not get involved in political struggles, he expands thinking about the era to the larger society that activists and direct victims of state terror were part of and claimed to represent. Carassai conducted interviews with 200 people, mostly middle-class non-activists, but also journalists, politicians, scholars, and artists who were politically active during the 1970s. To account for local differences, he interviewed people from three sites: Buenos Aires; Tucumán, a provincial capital rocked by political turbulence; and Correa, a small town which did not experience great upheaval. He showed the middle-class non-activists a documentary featuring images and audio of popular culture and events from the 1970s. In the end Carassai concludes that, during the years of la violencia, members of the middle-class silent majority at times found themselves in agreement with radical sectors as they too opposed military authoritarianism but they never embraced a revolutionary program such as that put forward by the guerrilla groups or the most militant sectors of the labor movement.

“Sebastián Carassai’s work is undoubtedly a welcome contribution to the scholarly literature due to the author’s exhaustive examination of the complex and shifting relationship between the ‘average’ Argentine and violence. . . . [T]he book helps readers to understand how middle-class disapproval of armed violence perpetrated by the revolutionary Left was not mirrored in the middle-class response to the terrorist state and in the ways in which collective memories of Peronism and violence continue to shape Argentina even today.” (Cara Levey Journal of Latin American Studies)

"Carrassai’s study is a fantastic experiment in pushing the boundaries of traditional historical methodology, and it is as informative as it is entertaining to read. This work will serve well to set a new agenda for memory studies of this period." (Jessica Stites Mor American Historical Review 2015-10-01)

"...The Argentine Silent Majority is a splendid book that greatly advances our understanding of Argentina during the 1970s, while also contributing to the study of middle-class formation and ideological change more generally."  (Matthias vom Hau Social Forces 2016-03-22)

"Carassai’s impressive work adds a necessary balance to studies on the 1970s in Argentina and Latin America, enlarging the already complex landscape of collective memories of the period." (Oscar Chamosa The Historian 2016-06-01)

"Carassai offers a theoretically sophisticated, empirically grounded analysis that not only casts new light on an important period of Argentine history but also is highly relevant to contemporary political and historiographical debates." (Jorge A. Nallim Canadian Journal of History 2016-11-07)

"The Argentine Silent Majority is an insightful account of the attitudes, perceptions and forms of self-understanding held by the Argentine middle classes with respect to the social and political environment of the 1970s. . . . [A]n important book that offers a fresh and elaborate analytical lens and rich empirical engagement with these understudied aspects of Argentina’s history, one that will surely also catch the attention of non-Latin Americanist readers interested in middle-class politics and the links between memory, remembrance and violence." (Luis Herrán Avila Estudios Interdisciplinarios de América Latina y el Caribe 2016-12-01)

1. The Argentine Silent Majority - Middle Classes, Politics, Violence, and Memory in the Seventies

2. The Argentine Silent Majority: Middle Classes, Politics, Violence, and Memory in the Seventies

3. The Argentine Silent Majority: Middle Classes, Politics, Violence, and Memory in the Seventies

4. The Argentine Silent Majority: Middle Classes, Politics, Violence, and Memory in the Seventies

5. The Argentine Silent Majority: Middle Classes, Politics, Violence, and Memory in the Seventies