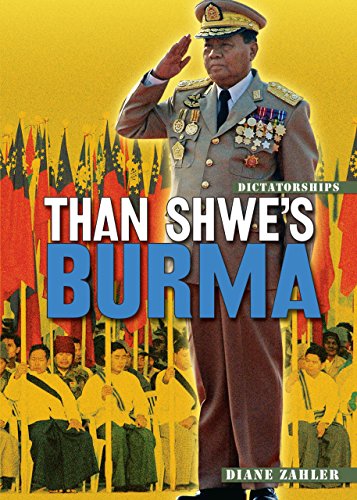 Than Shwe was part of a military coup that took over Burma in the 1960s. The British had granted Burma independence in 1948, but the country, with its many ethnic groups, had trouble building a democratic government. Than Shwe rose through the military ranks, and after the army stepped in to quell demonstrations and riots that began on August 8, 1988, he emerged as head of the military council. He became one of the most secretive and repressive leaders in the world. Than Shwe uses Burma's resources to finance a strong military. To suppress dissent, his soldiers destroy the countryside, sending people into hiding, refugee camps, or slavery. His control has isolated the country from international observers. In 2007, Internet images of monks being beaten during a protest rally reached the rest of the world. This was followed by reports in 2008 of a devastating cyclone, when Than Shwe banned outside aid for weeks. Both events helped to raise global awareness about the human rights abuses suffered by the Burmese people. In Than Shwe's Burma, learn more about this dictatorship and about Burma's long struggle to become a free nation.

Diane Zahler is the author of two nonfiction books for high-school students, The Black Death and Than Shwe's Burma, both published by Lerner Publishing Group. She lives with her husband and dog in New York's Harlem Valley.

Grade 10 Up—Burma (or Myanmar, as it has been renamed by the governing junta) is one of the most closed societies in the world. Than Shwe came to power after the explosive uprisings of 1988 and has largely managed to keep foreigners out. Unlike ideological dictators, he has no agenda other than maintaining close control over the country and the citizenry through oppressive measures covering everything from the distribution of food to travel from one village to another. Zahler outlines the nation's history and ably depicts life under Than Shwe's regime. Aung San Suu Kyi, the leader of the pro-democracy movement, receives almost as much attention as Than Shwe. A Who's Who lists major figures mentioned in the text, and sidebars cover topics like Burmese prisons, torture, and the black market. Full-color and black-and-white photos appear throughout. A useful volume, especially given Myanmar's recent coverage in the media.—Rebecca Donnelly, Loma Colorado Public Library, Rio Rancho, NM END