Items related to Ida Tarbell: Portrait of a Muckraker

Ida Tarbell: Portrait of a Muckraker 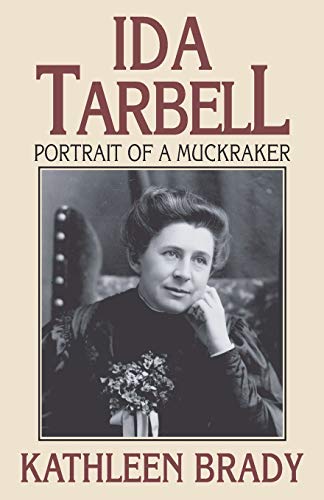 In this first definitive biography of Ida Tarbell, Kathleen Brady has written a readable and widely acclaimed book about one of America’s great journalists.

Ida Tarbell’s generation called her “a muckraker” (the term was Theodore Roosevelt’s, and he didn’t intend it as a compliment), but in our time she would have been known as “an investigative reporter,” with the celebrity of Woodward and Bernstein. By any description, Ida Tarbell was one of the most powerful women of her time in the United States: admired, feared, hated. When her History of the Standard Oil Company was published, first in McClure’s Magazine and then as a book (1904), it shook the Rockefeller interests, caused national outrage, and led the Supreme Court to fragment the giant monopoly.

A journalist of extraordinary intelligence, accuracy, and courage, she was also the author of the influential and popular books on Napoleon and Abraham Lincoln, and her hundreds of articles dealt with public figures such as Louis Pateur and Emile Zola, and contemporary issues such as tariff policy and labor. During her long life, she knew Teddy Roosevelt, Jane Addams, Henry James, Samuel McClure, Lincoln Stephens, Herbert Hoover, and many other prominent Americans. She achieved more than almost any woman of her generation, but she was an antisuffragist, believing that the traditional roles of wife and mother were more important than public life. She ultimately defended the business interests she had once attacked.

To this day, her opposition to women’s rights disturbs some feminists. Kathleen Brady writes of her: “[She did not have] the flinty stuff of which the cutting edge of any revolution is made. . . . Yet she was called to achievement in a day when women were called only to exist. Her triumph was that she succeeded. Her tragedy ws that she was never to know it.”

"Kathleen Brady brings to life the personality of Ida Tarbell, queen of the muckrakers, who was one of the first women to break the gender gap in American journalism. . . . [An] eminently balanced biography."
--New York Times

"Tarbell epitomizes the achieving women who is not a feminist. With her lithe, sympathetic, factual book, Brady helps us understand how that can be. A bitter lesson; but it keeps your eyes open; also your heart."

1. Ida Tarbell: Portrait of a Muckraker

2. Ida Tarbell: Portrait of a Muckraker