Items related to Union Combined Operations in the Civil War (The North's... 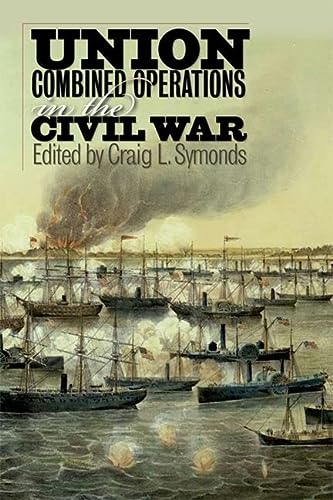 Despite a wealth of books on the campaigns of the American Civil War, the subject of combined or joint operations has been largely neglected. This revealing book offers ten case studies of combined Army–Navy operations by Union forces. Presented in chronological order, each essay illuminates an aspect of combined operations during a time of changing technology and doctrine.

The essays cover the war along the “rebel coast,” including the operations in the North Carolina Sounds in 1861, the Union thrusts up the York and James rivers during the Peninsular Campaign in 1862 and 1864, and the various Union efforts to seize rebel seaports from the Texas coast to Charleston and Wilmington in 1863–65. Concluding the volume are two essays that evaluate the impact of Union combined operations on
subsequent doctrine in both the United States and England.

Craig L. Symonds is Professor Emeritus at the U.S. Naval Academy and the author of many books on Civil War and naval history. He won the Theodore and Franklin D. Roosevelt Prize in 2005, The Lincoln Prize (with James M. McPherson) in 2009, and the Dudley Knox Medal for Lifetime Achievement in Naval History in 2014.

Scholarly thinking on different aspects of a topic of little-considered but lasting interest, this seacoast-oriented work has great virtue . . . Recommended. (―Choice)

Pulls together information from a diverse set of scholars to discuss an oft-overlooked aspect of Civil War history. (―Robert M. Browning Historian, US Coast Guard)

A most important work. It will appeal to historians in a variety of fields
including specialists in the Civil War, naval, and military history.

Prize-winning historian Craig Symonds has assembled a compelling collection of essays that clearly illustrate the importance of combined operation during the Civil War. Focusing on Union operations along the rebel coast that helped determine the outcome of the war, the authors reveal that success depended not only on technology, arms, and operational plans, but also on the personalities and the people involved. (―Gene Allen Smith author of Thomas ap Catesby Jones: Commodore of Manifest Destiny)

The contributors offer fresh and incisive insights into an overlooked and
undervalued facet of the Civil War by examining the complicated and often
stormy relationship between the Union army and navy in combined operations
along the Confederate coast.

. . . the authors have treated this frequently overlooked topic in a stimulating manner. This book is a starting place for further discussion on this important subject. (―Naval History)

The articles in this volume are consistently thoughtful, thought provoking, well written, and thoroughly researched. (―The Journal of Southern History)