Items related to Lost Unicorns of the Velvet Revolutions: Heterotopias...

Miglena Nikolchina Lost Unicorns of the Velvet Revolutions: Heterotopias of the Seminar

Lost Unicorns of the Velvet Revolutions: Heterotopias of the Seminar 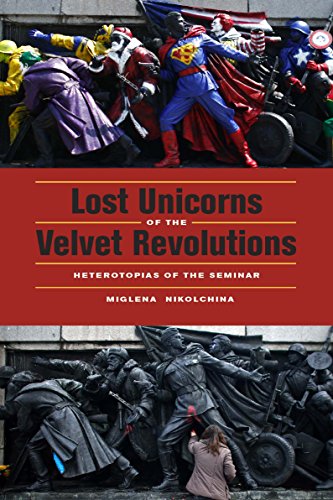 This book examines the eastern European seminar of the late 1980s and early 1990s―an ongoing academic meeting place outside the formal rubric of the university―tracing its evolution into a social movement on the street and identifying the political force of the theoretical conversations that took place there. It also shows how these theories reflect the loss of socialist idealisms and established materialist frameworks that eventually evolved into a set of heterotopic visions with a fundamentally altered sense of materialism.

It provides both glimpses of a genuinely alternative world to the Western academy that its denizens are so prone to critique, one in which oral discourse and dialogism were especially prominent values, and a utopian view of the Western intellectual world from that now-lost space.

This is the only book that portrays from within the experience and hopes of a very important intellectual form―the extra-university intellectual seminar in Eastern Europe under the Communist regimes.

Miglena Nikolchina is Chair of the Department of Theory of Literature, Sofia University, Sofia, Bulgaria. Her publications in English include Matricide in Language: Writing Theory in Kristeva and Woolf.

1. Lost Unicorns of the Velvet Revolutions: Heterotopias of the Seminar