Items related to Sacraments Of Love: A Prayer Journal

Sacraments Of Love: A Prayer Journal 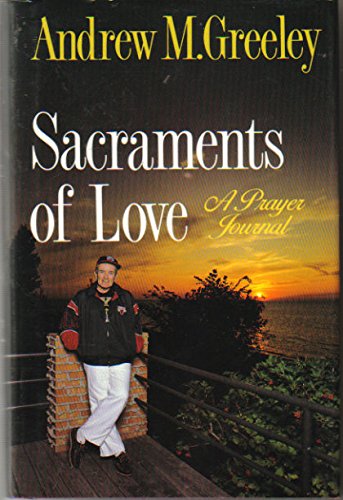 Like Love Affair, this spiritual diary is not a book of prayers but an experience of praying. It is prayer as it happens.
Andrew Greeley shares with God - whom he calls "My Love" - his wonder at the signs of Her love shining in creation. He glimpses Her presence in city shadows as well as desert light. He hears Her whisper in a wind that sweeps over a lake, and in the whistle of a train passing by in the night. And he perceives Her beauty in people: "All of them are sacraments of Your love!"
What makes the diary extraordinary is the extraordinary year it captures - a year in which Father Greeley works hard behind-the-scenes to help victims of sexual abuse by clergy. It is a year in which he reconciles with his archbishop and helps the Church deal realistically with a growing scandal. It is a year of recognition that surprises him, and a year of attack that hurts him.
But most of all, Sacraments of Love points the author - and the reader - to a non-punitive, all-loving God who moves everywhere - a God who wants to touch each of us with Her love.

Fifteen months (September 1991--December 1992) in the life of sociologist, novelist, poet, essayist, and Catholic priest Greeley (Fall From Grace, etc. etc. etc.). One immense idea underlies all of Greeley's works: the celebration of God as lover and beloved. Here, journal entries address God as ``my love'' and sign off with ``I love you.'' Greeley whispers secrets to God, praises him, pleads with him. Always, he admires God's playfulness; visiting the Chicago Oceanarium, he wonders whether ``anyone without a great sense of fun...and a wild imagination [would] have come up with such marvelous creatures?'' Often he turns introspective, wondering about his role as priest and novelist: How to reconcile activism with dislike of self-promotion? How to preside at a wedding without deflecting attention from the bride and groom? Public life grinds him down: ``I treat myself like a machine to produce work to please others'' (this machine metaphor crops up more than once). A current crisis--pedophilia in the priesthood--darkens the year, but mostly Greeley thanks God for abundant blessings: renewed affiliation with the University of Chicago; repair of a strained friendship with his bishop; a meeting with actress Kathleen Turner, who proved to be an ardent fan. Marking his birthday, he sends up the exclamation: ``Sixty-four years drenched in grace!'' He reads voraciously (Seamus Heaney, John Shea, Paul Davies); goes to the opera, movies, and football games; scribbles haiku; tosses in the occasional brilliant literary insight (e.g., that Flaubert despised his characters). Plenty of prayers here--for Greeley, his friends, his enemies- -but more the journal of an exceptionally active man whose life, or so he prays, is ``possessed by love.'' -- Copyright ©1993, Kirkus Associates, LP. All rights reserved.

Ferry, who was born in 1952 in a suburb of Toronto, tried much of his early life to suppress his homosexuality because of his strong Anglican faith. His marriage proved to be unsuccessful, and Ferry found himself, even as he studied for the priesthood, investigating the gay subculture of Toronto. He became a priest and served his ministries well, but began to have homosexual affairs. After he became pastor of a church in a Toronto suburb, several members of the congregation protested to the bishop about Ferry's homosexuality. His subsequent trial, as he relates it here, amounted to a 20th-century witch-hunt, with the religious court's decision something out of Catch-22 in that the church found Ferry "not guilty of disobedience since the bishop had never in fact instructed him to give up his relationship, but guilty of wrongdoing for refusing to give it up." Although this book sometimes reads like a self-help journal, its earnest but dry prose is a strong indictment of homophobia both in the church and society. The defrocked Ferry now works with a Toronto AIDS organization. Author tour.
Copyright 1994 Reed Business Information, Inc.

1. Sacraments of Love A Prayer Journal