Items related to Guests In Their Own House: The Women of Vatican II

Carmel McEnroy Guests In Their Own House: The Women of Vatican II

Guests In Their Own House: The Women of Vatican II 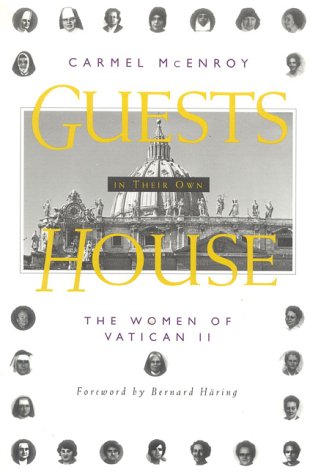 Explores the experiences and contributions of the twenty-three women present at Vatican II, the role of women in the Catholic Church, and their historic exclusion from the all-male Council

Carmel McEroy, a Sister of Mercy and distinguished professor of theology, was fired in 1995 from St. Meinrad Seminary for her "public dissent" from church teaching on women's ordination. Her name had appeared with hundreds of others in an advertisement questioning the issue in the National Catholic Reporter.

McEnroy refers to this book as a detective project, noting that it started with "one name and a healthy dose of anger." The name was Mary Luke Tobin, who, at the time of the Second Vatican Council, was mother general of the Sisters of Loretto. McEnroy was studying at Marillac College in St. Louis at that time, boarding with the Sisters of Loretto; she shared their excitement when Tobin was invited to the council as an auditor. The anger was triggered by Alberic Stacpole's 1986 account of the council, which, following "official" histories, did not report the presence of women and did not include accounts by laity, though it purported to revisit Vatican II with "those who were there." McEnroy interviewed almost all of the 23 women invited to the council as auditors; those interviews, along with extensive archival research and interviews with other participants--official and unofficial--provide the basis for this important and accessible history. The autobiographical dimension--including the postscript, which describes McEnroy's dismissal from the faculty of St. Meinrad School of Theology for public dissent from church teaching on women's ordination--adds a great deal to the book. Steve Schroeder

1. Guests In Their Own House: The Women of Vatican II

2. Guests In Their Own House: The Women of Vatican II Carmel McEnroy and Bernard Haring