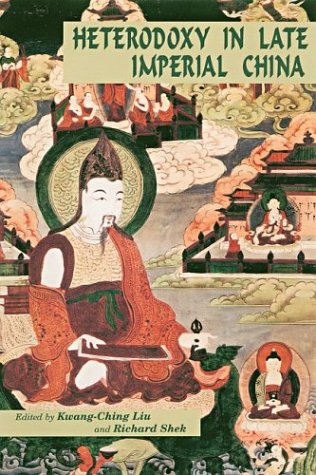 Cultural and intellectual protests, while rare, were recurrent in Chinese society. This impressive and comprehensive work traces the origins of dissent to elements of Daoism and Buddhism in the Ming (1368-1644) and Qing (1644-1911) dynasties and expands on their significance in modern times. Daoists and Buddhists were often conservative, coexisting in a society distinguished by entrenched institutions--monarchical, bureaucratic, and familial. Yet dissenting ideas and movements did arise, and society was not so rigid as to preclude the critical impulse. Countervalues found expression in elite philosophical thought and, less articulately, in popular religious movements.

In a series of well-documented case studies ranging over the centuries, contributors examine aspects of early Daoism and Buddhism as essential background to the sectarian movements of the Ming and the Qing periods. They take up White Lotus ("Eternal Mother") millenarianism prior to and during the eighteenth century and the Triads of the nineteenth, who were, it seems, only politically heterodox. Finally the most radical and populist traditions are explored: the quasi-Christian Taipings of the nineteenth century and the elite Republican movement of the early twentieth.

Heterodoxy in Late Imperial China attempts to define the efforts of groups and individuals to propose alternatives to the formidable socioethical orthodoxy of China's heritage. By approaching modern China from its long-standing tradition of dissent, it provides essential reading for those seeking the enduring themes of China's nonofficial history and especially the transition between the late imperial and modern eras.