Items related to Simply History: Renaissance to the Late 1800s 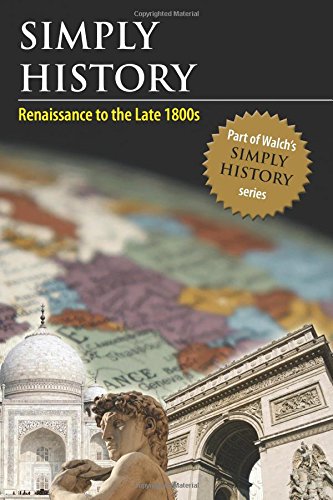 The second in a series of three accessible world history overviews, Simply History: Renaissance to the Late 1800s reviews the key people, places, and events in the history of the world from the end of the Middle Ages to the late 1800s. It shows how these elements of history continue to affect societies around the world today. As with other books in Walch’s Simply History series, it strives to present a brief, even-handed overview of selected highlights. These include: A Rebirth in Europe - the alterations that marked the end of the medieval period in Europe and the start of the Renaissance as changes in farming and the growth in trade led to new social systems, national structures, and approaches to religion. Including some of the great thinkers and artists of the Renaissance period. Asia’s Empires - the strong cultures that arose in Japan, China, and India including the Qing and Ming dynasties in China, the Mogul empire in India, and the feudal period in Japan under the shoguns. European Exploration and the New World - the meeting of East and West brought about by European interest in Asian spices and other goods and how the search for new trade routes led Columbus to the Americas followed by the European drive to explore, seize, and colonize these new lands. Europe Colonizes the Globe - the results of European exploration, including the rise of European trading economies and the response of China and Japan to European attempts to trade with them including Britain’s role in India after the fall of the Mogul Empire, and the effects of European expansion in Africa. New Ideas Lead to Revolution - the Enlightenment, a period of new ideas and how they helped inspire revolutions around the world, including in the American colonies, in France, and in Latin America and the governments that followed. The Industrial Revolution - the series of developments that led to industrialization, first in Britain and then in other countries including the changes in society that came about as a result. Nationalism and Social Reform - how the social evils of the Industrial Revolution led to different approaches to helping workers achieve fair treatment, the growing sense of national identity in Europe and the drive for expansion in the United States, the struggle to end slavery in the United States, and to give women the right to vote. Imperialism - the way European powers built empires around the world, including in Africa and southern Asia including the different ways these powers used to take control of other countries and how the conquered nations responded to colonization.

Robert Taggart, Ph.D., is a Professor of Finance at the Wallace E. Carroll School of Management at Boston College. He has served as President of the Financial Management Association and is currently the Corporate Finance Editor of the Journal of Economics and Business. Dr. Taggart is also the author of Quantitative Analysis for Investment Management as well as numerous articles in finance and economics journals.

Book Description J Weston Walch, 2014. Condition: Good. A+ Customer service! Satisfaction Guaranteed! Book is in Used-Good condition. Pages and cover are clean and intact. Used items may not include supplementary materials such as CDs or access codes. May show signs of minor shelf wear and contain limited notes and highlighting. Seller Inventory # 0825169933-2-4

Book Description Walch Education 2011-11-30, 2011. Paperback. Condition: Very Good. Item is in very good condition. If supplemental codes/CDs for textbooks are required please contact us prior to purchasing as they may be missing. Seller Inventory # DS-0825169933-2

Book Description Walch Education. Paperback. Condition: Very Good. A copy that has been read, but remains in excellent condition. Pages are intact and are not marred by notes or highlighting, but may contain a neat previous owner name. The spine remains undamaged. At ThriftBooks, our motto is: Read More, Spend Less. Seller Inventory # G0825169933I4N00