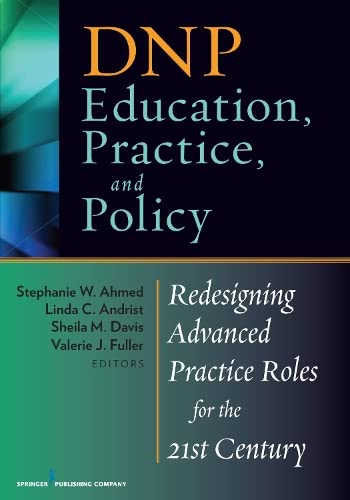 This is an excellent book for both students and current DNPs. The primary areas it addresses--leadership, healthcare policy, and information technology---are essential for the advanced practice nurse to function as a change agent in today's healthcare environment. The book challenges DNPs to engage in clinical practice to the full scope of their capabilities."--Score: 100, 5 Stars. Doody's Medical Reviews

This is the only professional issues-oriented Doctor of Nursing Practice (DNP) text to fully integrate all eight American Association of Colleges of Nursing DNP competencies into one volume. It defines practice scholarship for the DNP role and facilitates the sound development of key leadership skills that enable DNP graduates to effectively influence politics and health care policy in order to improve patient and population health care outcomes.

The text focuses on the educational requirements of DNPs engaged in the arenas of leadership, health care policy, and information technology. It covers the growth and development of the DNP role, particularly in the context of contemporary health care challenges. With a focus on the Capstone Project, the text addresses the relationship of the DNP role to ongoing scholarship. It covers three important essentials of the DNP curriculum√≥evidence-based practice, health information technology, and outcomes measurement√≥and how they can be used to transform health care in the 21st century. The text's challenging and thought-provoking content is of particular value not only to students, but also to professors who will welcome the clarity it offers to the highly complex DNP curriculum.

Ahmed, DNP, FNP-BC, DPNAP Presently, Dr. Ahmed holds a dual role as the Nursing Director at Brigham and Women's/Massachusetts General Hospital Health Care Center in Foxboro, MA, and an expanded role of Nursing Director across the ambulatory enterprise of Brigham & Women's Hospital, in Boston, MA. In this capacity, Stephanie has a key role as clinical leader of the discipline of nursing and is actively engaged in the organization's care redesign initiatives. She is a nurse practitioner, and coordinated the complex care of the nation's first partial face transplant patient at Brigham and Women's Hospital in Boston. Recognizing the value of the DNP to expand the leadership skills of the Advanced Practice Nurse, she completed a DNP in administration. She is an Assistant Professor of Nursing at the University of Massachusetts Graduate School of Nursing, in Worcester, MA, where she has taught Trends in Nursing and further provided instruction and oversight for the DNP Residency program. She has served in both faculty and lecture roles in various Boston-based nursing programs including the MGH Institute of Health Professions where she taught Adult Primary Care Seminar and Professional Issues in Nursing, and also at Simmons College where she serves as faculty for Leadership and Management in the Clinical Setting. Dr. Ahmed has been intimately involved in leadership roles with several professional societies, including STTI (Chapter Secretary for the Upsilon Lambda Chapter), Massachusetts Coalition of Nurse Practitioners (Legislative Committee Co-Chair) and the Institute for Nursing Health Care Leadership (Associate) representing the consortium of Harvard-affiliated Nursing Services. Acknowledged nationally for her work to advance nursing practice and a commitment to interdisciplinary team work, Dr. Ahmed is a fellow of the National Academies of Practice and holds the title of Distinguished Practitioner. She has published in peer-reviewed journals and has been invited speaker on the DNP topic at both the state and national levels, where she maintains an active presence.||Linda Andrist, PhD, RN, WHNP-BC, is Professor and Assistant Dean of Graduate Programs at the MGH Institute of Health Professions School of Nursing, Boston. She has directed the DNP program since 2007 and has been instrumental in curriculum development. She teaches courses relevant to the capstone experience, such as Knowledge and Inquiry, Doctoral Practicum, Capstone Development, and Residency. She is active in the DNP movement at the national level. Dr. Andrist previously coordinated the women's health nurse practitioner program at the Institute and was one of the authors of the NONPF Nurse Practitioner Primary Care Competencies in Specialty Areas: Adult, Family, Gerontological, Pediatrics, and Women's Health (2002). Dr. Andrist has many years of practice as a WHNP in reproductive health care and has been teaching at the graduate level for more 30 years. She is a CCNE accreditation site visitor, and a consultant to the Ohio Board of Regents for accreditation of new DNP programs. She was a 2010-2011 Fellow in the AACN Leadership for Academic Nursing Programs. Dr. Andrist has over 30 publications in peer-reviewed and invited book chapters. She is the author of A History of Nursing Ideas. |Sheila Davis, DNP, ANP-BC, FAAN., is Assistant Clinical Professor in Nursing at the MGH Institute of Health Professions, and is the Director of Global Nursing at Partners In Health, an international non-governmental organization working in 12 countries providing comprehensive health care and services for the poor globally. Dr. Davis has had a clinical practice as an APN (DNP) in the Infectious Diseases clinic, at Massachusetts General Hospital (MGH), Boston since 1997. Since 1992, Dr. Davis has been on faculty or as a guest lecturer at a number of schools of nursing, including Howard University, Simmons College, Northeastern University, University of Natal (Durban, So Africa); and Boston College.. She is the recipient of numerous awards and has served a variety of organizations including Physicians for Human Rights (Nurse member/HIV-AIDS, Healthy Women Summit), Clinton Foundation (Nurse Member, 12 -person team to develop comprehensive HIB/AIDS National Treatment Plan for So Africa), APHA (Member, Expert Panel on Adherence) and currently is on the editorial board of the International Journal of Health and Human Rights. She co-founded a nurse-run non-governmental organization working in South Africa on a rural nurse run clinic and orphan feeding program in an urban township. Her publications include 17 papers, 9 abstracts and 2 book chapters. Dr. Davis is deeply involved with Association of Nurses in AIDS/HIV Care (ANAC), was the founding/elected president of the Washington DC chapter and has been a local, nationally, and internationally invited speaker on AIDS/HIV for ANAC since the mid-1980's. She has presented on a number of topics in global health and infectious diseases nationally and internationally. |Valerie Fuller, DNP, ACNP-BC, FNP-BC, GNP-BC is a nurse practitioner in the Department of Surgery, Maine Medical Center, Portland, ME and Clinical Assistant Professor at Tufts Medical School, Boston, MA. In addition Dr. Fuller holds certifications as a wound ostomy nurse and RN First Assistant. She has worked in a variety of positions in medicine and surgery in both Maine and Oregon. She is the past president of the Maine Nurse Practitioner Association having served on its Executive Board for 5 years. She is the APRN representative to the Maine State Board of Nursing and APRN representative to the National Council of State Boards of Nursing. The focus of her doctoral work was delirium education and she continues to lecture extensively on the topic.