Items related to The Rhetoric of Politics in the English Revolution...

Skerpan, Elizabeth The Rhetoric of Politics in the English Revolution 1642-1660

The Rhetoric of Politics in the English Revolution 1642-1660 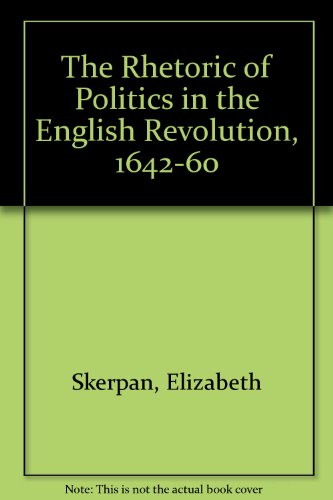 What happens to the discourse of a political community when the ideological assumptions that underlie that discourse are challenged? In The Rhetoric of Politics in the English Revolution, 1642-1660, Elizabeth Skerpan illustrates the interdependency of discourse and ideology by examining the petitions, published speeches, and pamphlets of the English Revolution. The Revolution of 1642 was a revolution not only of politics, but also of public access to information and propaganda.
For the first time in western history, large numbers of literate people had access to a mass medium--printing. Through this medium, writers and readers across the political spectrum were forced to come to terms with their common background of rhetorical training as it clashed with their widely divergent ideas of kingship and the role of the governed.
The Rhetoric of Politics analyzes three stages of the revolution: the events precipitating the first civil war, the regicide, and the debate over the restoration of the monarchy. Skerpan's primary focus is on John Milton, particularly his Eikonoklastes, The Tenure of Kings and Magistrates, and The Readie & Easie Waye to Establish a Free Commonwealth. Other prominent writings studied are John Foxe's Acts and Monuments (commonly known as The Book of Martyrs), the Eikon Basilike, and several works of James Harrington.
In addition, Skerpan explores many tracts of the period from both parliamentary and royalist writers. The result is a book that sheds light on each side of the debate and illustrates how writers of different ideologies adapted (or failed to adapt) the genres of political argument.
The book will be of interest to students and scholars of seventeenth-century politics and literature, as well as to anyone interested in the way that rhetoric can be used either as an instrument of change or as an instrument of control.

Book Description Univ of Missouri Pr, 1992. Condition: Good. A+ Customer service! Satisfaction Guaranteed! Book is in Used-Good condition. Pages and cover are clean and intact. Used items may not include supplementary materials such as CDs or access codes. May show signs of minor shelf wear and contain limited notes and highlighting. Seller Inventory # 0826207995-2-4