Items related to The Postmodern Imagination of Russell Kirk (Volume... 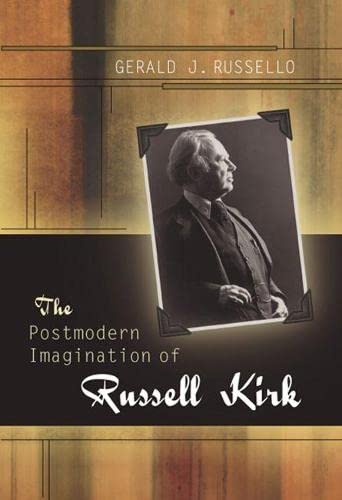 Author of The Conservative Mind, Russell Kirk (1918–1994) was a principal architect of the American intellectual conservative movement. This book takes a closer look at his works on such subjects as law, history, economics, and statesmanship to introduce a new generation of readers to the depth and range of his thought.

Kirk probed the very meaning of conservatism for modern intellectuals, and in The Postmodern Imagination of Russell Kirk, Gerald Russello examines such key concepts of his thought as imagination, historical consciousness, the interplay between the individual and tradition, and the role of narrative in constructing individual and societal identity. By stressing the importance of Kirk’s perception of imagination, he offers a new approach to understanding him, showing not only that Kirk laid the groundwork for the “new conservatism” of the 1950s and ’60s, but also that his work evolved into a sophisticated critique of modernity paralleled in the work of some postmodern critics of liberalism.

In order to reconstruct Kirk’s attack on modernity, Russello examines his textbook on economics, his fiction, his work on Robert Taft and Orestes Brownson, his writings on the role of the statesman, and his neglected essays such as “The Age of Discussion” and “The Age of Sentiments.” Russello shows that Kirk welcomed the rise of some form of postmodernism, seeing in it a new opportunity for conservatism to engage the wider culture. Through this analysis, he situates Kirk within wider currents of contemporary thought, connecting him not only with such major thinkers as Lyotard, Boorstin, and Koestler but also with such lesser-known figures as Bernard Iddings Bell, Charles Baudouin, and Christopher Dawson.

By examining Kirk’s development of the imagination as a tool of conservative discourse, Russello offers an alternative genealogy for conservative thought that melds its antimodernism with postmodern themes. He has forged a lively and provocative work that provides unusual perspectives on Kirk within the wider context of debate over the future of conservatism in a time of shifting alliances—a book that will be a valuable resource for anyone seeking to understand Kirk or conservative thought.

Gerald J. Russello is a Fellow of the Chesterton Institute at Seton Hall University and editor of University Bookman. He is the editor of Christianity and European Culture: Selections from the Work of Christopher Dawson. He lives in Brooklyn, New York.

“Gerald Russello has given us a penetrating analysis of Kirk’s thought, and of the increasingly contested elements of American conservatism. Even more impressive is Russello’s nuanced discussion of the role various forms of human imagination have played in the construction of modernism and its successors. This book itself constitutes an important step toward a redeemed imagination and a full, moral postmodernism.”—Bruce Frohnen, editor of American Conservatism: An Encyclopedia

“In the pantheon of American conservative thinkers, Russell Kirk looms large as a tenacious critic of liberal modernity. In this provocative and illuminating study, Gerald Russello examines the philosophical and moral vision that animated Kirk’s defiant antimodernism. Russello gives us a lucid and perceptive account of Kirk’s carefully crafted traditionalism and of its surprising affinities with much of contemporary postmodernism. In a time of deepening flux across the intellectual landscape, Russello’s volume enlarges our understanding of the complex character of American conservatism.”—George H. Nash, author of The Conservative Intellectual Movement in America since 1945

The Postmodern Imagination of Russell Kirk