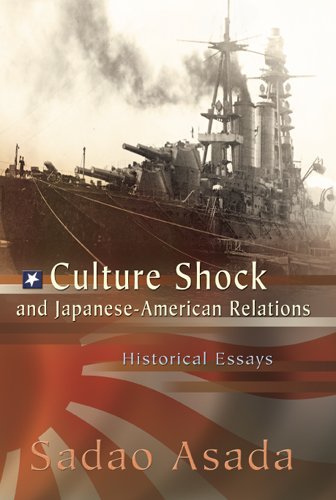 Ever since Commodore Perry sailed into Uraga Channel, relations between the United States and Japan have been characterized by culture shock. Now a distinguished Japanese historian critically analyzes contemporary thought, public opinion, and behavior in the two countries over the course of the twentieth century, offering a binational perspective on culture shock as it has affected their relations.

In these essays, Sadao Asada examines the historical interaction between these two countries from 1890 to 2006, focusing on naval strategy, transpacific racism, and the atomic bomb controversy. For each topic, he offers a rigorous analysis of both American and Japanese perceptions, showing how cultural relations and the interchange of ideas have been complex—and occasionally destructive.

Culture Shock and Japanese-American Relations contains insightful essays on the influence of Alfred Mahan on the Japanese navy and on American images of Japan during the 1920s. Other essays consider the progressive breakdown of relations between the two countries and the origins of the Pacific War from the viewpoint of the Japanese navy, then tackle the ultimate shock of the atomic bomb and Japan’s surrender, tracing changing perceptions of the decision to use the bomb on both sides of the Pacific over the course of sixty years. In discussing these subjects, Asada draws on Japanese sources largely inaccessible to Western scholars to provide a host of eye-opening insights for non-Japanese readers.

After studying in America for nine years and receiving degrees from both Carleton College and Yale University, Asada returned to Japan to face his own reverse culture shock. His insights raise important questions of why people on opposite sides of the Pacific see things differently and adapt their perceptions to different purposes. This book marks a major effort toward reconstructing and understanding the conflicted course of Japanese-American relations during the first half of the twentieth century.

Sadao Asada is Professor Emeritus of Diplomatic History at Doshisha University in Kyoto, Japan. His Japanese-American Relations between the Wars (in Japanese) won the coveted Yomiuri Yoshino Sakuzo Book Prize. For his essays, he has been awarded the Edward S. Miller History Prize by the U.S. Naval War College and the Louis Knott Koontz Memorial Award by the American Historical Association. His other books include Japan and the World, 1853–1952: A Bibliographic Guide to Japanese Scholarship in Foreign Relations and From Mahan to Pearl Harbor: The Imperial Japanese Navy and the United States.

"These essays reflect the life work of one of Japan’s foremost, if not the foremost, historians of Japanese-American relations. They are both richly detailed and intellectually provocative.”—Roger Dingman, author of Ghost of War: The Sinking of the “Awa maru” and Japanese-American Relations, 1945–1995

Book Description University of Missouri, 2007. Condition: Good. A+ Customer service! Satisfaction Guaranteed! Book is in Used-Good condition. Pages and cover are clean and intact. Used items may not include supplementary materials such as CDs or access codes. May show signs of minor shelf wear and contain limited notes and highlighting. Seller Inventory # 0826217451-2-4