Items related to Poets of the Non-Existent City: Los Angeles in the... 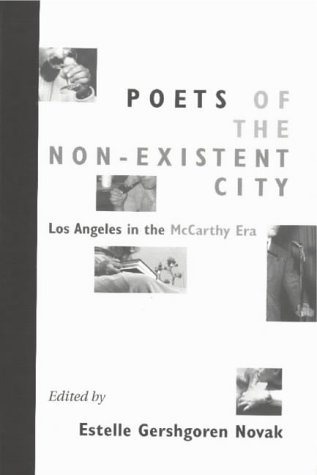 Though unacknowledged by the larger literary world, which looked down on Southern California as a cultural desert, poetry flourished in the Los Angeles of the 1950s. But the very period during which the arts were burgeoning was shadowed by the work of the regional committees that brought the anti-Communist investigations of Senator Joseph McCarthy to Hollywood.

Two Los Angeles literary journals, The California Quarterly and Coastlines, made a strong stand against McCarthyism. The two published many of the same writers and artists and shared the same liberal politics. Combined, they represent almost thirteen years of poetry and graphic arts in Los Angeles. Poets of the Non-Existent City collects for the first time the poems, artwork, and commentary of these journals, long buried in literary archives. Among the nineteen poets whose work is presented here are Tom McGrath, Naomi Replansky, Charles Bukowski, Gene Frumkin, Sid Gershgoren, and Josephine Ain. Brief memories from some of the poets who are still living are also included, and the editor places the poetry in the context of the Beat movement and the fashion of reading poetry aloud and with jazz, as well as in the context of McCarthy censorship.

As this collection vividly demonstrates, the poets and artists were not intimidated by pressure to refrain from social and political commentary or to write about the uncontroversial. Two of their number were brought before the committee; one was blacklisted, and the first issue of Coastlines was enshrined in the files of the FBI. But Poets of the Non-Existent City also shows us a community of writers and artists sustained not by their politics but by their passion for language and the things of this world.

Collects for the first time the poems, artwork, and commentary of two outstanding Los Angeles literary journals during the 1950s McCarthy years.

1. Poets of the Non-Existent City - Los Angeles in the McCarthy Era