Items related to Running Toward the Light: The George Mendoza Story

Running Toward the Light: The George Mendoza Story 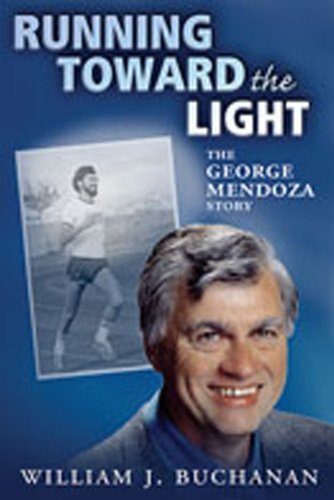 At the age of fifteen, George Mendoza lost all of his central vision and 80 percent of his peripheral vision. After months of research, Mendoza's mother learned bright light could sometimes help those with vision problems similar to his. In 1972, hoping to help her son, she moved them both from New York to Las Cruces, New Mexico.

Mendoza was angry and bitter; he was a teenager who faced limitations he had never imagined. Enrolled in the New Mexico School for the Visually Handicapped, he renewed an earlier passion for running track, but his resentment did not leave him.

Shortly after high school graduation, Mendoza heard of the curative powers of El Santuario de Chimayó in the Sangre de Cristo Mountains north of Santa Fe. He hitchhiked to the small village, skeptical of a miracle cure. His vision was not restored, but Mendoza underwent a transformation in the Chimayó chapel. He realized he was not handicapped; he was a person with a handicap. "I've got bad eyes, sure, but there's nothing wrong with my heart or my lungs or my legs." He concluded he was meant to be an inspiration to others "with a handicap."

Thus began a new chapter in George Mendoza's life. He joined the track team at New Mexico State University, entered marathons, and, in 1980, ran in the International Olympiad for the Physically Handicapped in the Netherlands.

Today, Mendoza has perfected another hidden talent: he is an exceptional artist and his one-man shows are continual reminders that having a handicap does not diminish the individual's abilities in other areas. This biography of the man who refuses to "be handicapped" will be an inspiration to all who read it.

"Running Toward the Light is the true story of George's long journey back from darkness into the light. I find the book tremendously important--not only for its dramatic impact, but for the indefatigable courage of the man who is its subject. So many of us are tempted to crumble under what we perceive to be unbearable burdens. It's an inspiration and a challenge to read about one who has triumphed over that, and so much more."--Jane Seymour, television and screen actress

The inspiring life of the runner and artist who refused to be defeated by blindness.

William J. Buchanan (1926-2005) served as adjunct professor of creative writing at UNM for eight years. He is the author of six books, three of which have been made into movies.

1. Running Toward the Light: The George Mendoza Story