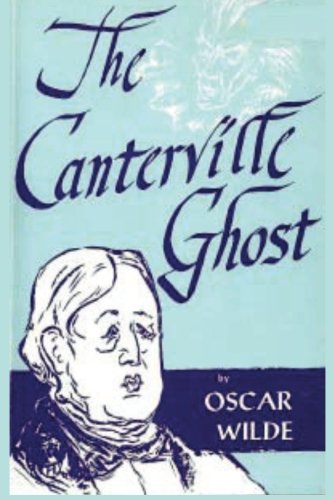 An American family goes to England to live and to learn how the British live. Moving into a haunted house, despite being told it was haunted, Oscar Wilde begins to have fun not only with the Americans’ way of life but with the British as well, injecting humor at every moment and satire especially of the Americans. In the end, the ghost becomes significant. Through him, young Virginia learns about life and death and that love transcends it all. The short story continues to be popular. It became a movie in 1944 with Charles Laughton, and several other movies have been released as recently as 1997; it has also had many television renditions.

Oscar Wilde (1854-1900) was an Irish-born poet, dramatist, and novelist. His works include collections of fairy stories; the novel The Picture of Dorian Gray; and many brilliantly witty plays, including what is often considered to be his masterpiece, The Importance of Being Earnest.

'Paranormal activity at Wilde's Canterville. When it comes to handling ghosts, the characters in Oscar Wilde's The Canterville Ghost (in a new recording from Naxos AudioBooks) are far bolder than Ebenezer Scrooge in A Christmas Carol. When Marley's ghost comes rattling his chains, you may remember, the old miser drops his gruffness in the face of his old associate's awful warnings. Not Wilde's Hiram B. Otis, an 'American minister' who purchases an English country house and moves in with his family despite dire warnings that it is haunted. The ghost, Sir Simon Canterville - who's been scaring the daylights out of the house's inhabitants since his death in 1584 - wastes no time in mounting a haunt. In the dead of night, Otis hears chains clanking in the halls and beholds an awful sight: Right in front of him he saw, in the wan moonlight, an old man of terrible aspect. His eyes were as red burning coals; long grey hair fell over his shoulders in matted coils; his garments, which were of antique cut, were soiled and ragged, and from his wrists and ankles hung heavy manacles and rusty gyves. 'My dear sir,' said Mr. Otis, 'I really must insist on your oiling those chains, and have brought you for that purpose a small bottle of the Tammany Rising Sun Lubricator.' Oiling those chains! Rupert Degas is pitch-perfect in the Naxos recording -quite a departure from some of his previous Naxos recordings, including Cormac McCarthy's The Road and Kafka's The Trial. The grimness and desperation of those stories is far from the desperation Sir Simon faces with the Otises. No matter what he does, he can't bloody well scare them! The couple's twins boys hit him in the knees with pea-shooters, and, when Mrs. Otis hears the ghost's terrible laugh, her reaction is: 'I am afraid you are far from well ... and have brought you a bottle of Dr. Dobell's tincture. If it is indigestion, you will find it a most excellent remedy.'â ¨ Degas captures the nasally voices of the Americans (for Wilde, Americans are the ones with the accents) and Sir Simon's exasperated harrumphs - which turn, later, into sighs of relief as somebody finally pities him: the Otises' daughter, Virginia. Degas gives listeners a hilarious performance that's an ideal antidote for the shivers if you've seen Paranormal Activity.' - Nick Owchar, Los Angeles Times 'British actor Degas' gift for accents and flair for the dramatic make him an excellent choice to read Wilde's beloved gothic ghost story set in Great Britain. A ghost has been haunting residents at Canterville Chase for centuries. But these poltergeist powers seem lost on the Otis family from America. Degas' reading is lively, brisk, and laced with just the right amount of foreboding, and he subtly raises pitch during suspenseful moments. Degas gives Mr. Otis the deep, monotone, matter-of-fact tenor of a dull diplomat, while he portrays Mrs. Otis, a Manhattan socialite, in a much higher register, pretentious and pinched. The ghost, frustrated and world-weary over failure to frighten, is appropriately raspy and guttural. Each chapter is introduced by classical music and abundant sound effects - rattling chains, creaking floorboards, thunder and lightning - to greatly enhance the mood. Perfect for a dark and stormy night.' - Allison Block, Booklist Anyone who is only familiar with the old Margaret O'Brien and Charles Laughton movie version or one of the more recent versions of The Canterville Ghost will enjoy meeting the Otises and the ghostly Sir Simon as Wilde actually envisioned them. When the American Minister to the court of St. James purchases Canterville Chase and is warned of the ghost, he declines to believe in it and says he will 'take the furniture and the ghost at evaluation.' As Sir Simon proceeds to haunt (and he has fearsomely haunted before) he comes to believe in him, but he and his family will brook no nonsense. They give him something to oil his noisy chains. The twin sons bedevil him, and the daughter takes pity on him. Rupert Degas is an excellent narrator with his fine cultured British voice as the present Lord Canterville, the past Sir Simon, and with a pretty good set of American accents for all members of the Otis family, male and female - This is such fun to hear the authentic and brilliant Wilde and it is very enjoyable family listening for all ages. - Mary Purucker, SoundCommentary.com

4. Canterville Ghost: An Amusing Chronicle of the Tribulations of the Ghost of Canterville Chase When His Ancestral Halls Became the Home of the American Minister to the