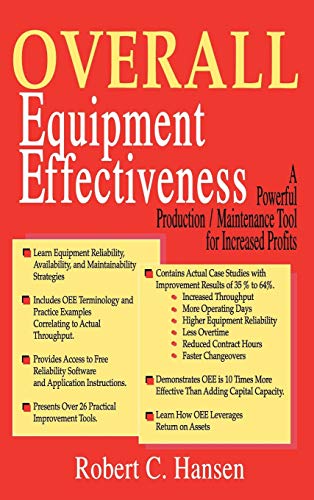 This is the CD-ROM only version of this popular title. Contains the complete contents of the book, fully searchable, with interactive table of contents and index, in Adobe's popular portable document format (PDF).

Written primarily for those responsible for the reliability of equipment and the production operation, this innovative book centers on developing and measuring true Overall Equipment Effectiveness (OEE). The author demonstrates that true OEE correlates with factory output, provides a methodology to link OEE with net profits that can be used by reliability managers to build solid business cases for improvement projects, and draws on his own experience by presenting successful improvement applications in every chapter. Additionally, it will also help practitioners better understand Total Productive Maintenance (TPM) and develop an effective foundation to support Reliability-Centered Maintenance (RCM). This is the CD-ROM only version of this popular title.

While at Kodak Bob was instrumental in the implementation of key shutdown improvement strategies providing 9 additional production days, and implementing predictive maintenance systems and reliability projects culminating in a 41% reduction in equipment downtime per million linear feet for one of Kodak's largest sensitizing machines. Additionally, he was a member of Kodak's Worldwide Melt/Coat Managers Team for seven years and the Worldwide Health Imaging Finishing Managers Team for more than a year. He served on his plant's reliability team and was responsible for reliability benchmarking.

As a member of the Society of Maintenance Reliability (SMRP), Bob has authored two well-received articles for Maintenance Technology Magazine, "Unleashing the Power of OEE", and "General Tool for Acceptance Testing." As a speaker at the SMRP 1998 conference and at the 1999 MainTech South conference, he presented the OEE article.

Currently he is the Owner and sole proprietor of R.C. Hansen Consulting, LLC. It specializes in identifying and implementing manufacturing productivity improvements for factories seeking to improve Overall Equipment Effectiveness.

Effective factories usually have coordinated teams that work synergistically with a common purpose. The teams, which are from all areas of the factory, have win-win relationships with their interdependent areas and services.

According to a panel of five reliability consultants at the year 2000 annual conference of the Society of Maintenance Reliability Professionals (SMRP), successful initiatives and programs are primarily driven from the top down rather than from the bottom up. In fact when asked, the panel couldn’t relate a single successful experience with a bot-tom up initiative unless it was first communicated to and accepted by the area leadership.

My own experience supports the concept that successful pro-grams can be implemented at the level of the ‘Champion’ on down. This can be seen where successful programs develop in one work center without ever transferring to other factory areas. When the person who championed the program leaves or transfers, all too often the work center does not sustain the high performance. However, the champions are able to generate new initiatives in other areas once they establish a rapport with the new community.

Management support and area leadership significantly influences the success of initiatives. To sustain a level of excellence, the total community--management, the line organization, and support groups--has to be of one mind. High performance work groups bridge the ‘top down’ syndrome by acceptance of synergistic team leadership.

Nearly everyone comes to work with a desire to do a good job and to be part of a successful unit. Your job and the security of your business depend on strong productivity and top effectiveness. Frustration comes when priorities are not clear and reinforcement is awarded inconsistently. Thus, a single metric--measuring the community as a whole-- can be powerful in bringing everyone together.

Let’s look at an example. I once facilitated a workshop activity aimed at improving the changeover time between orders for a packaging operation. This area had four similar flow-lines working around the clock seven days a week. The area had four shifts with four crews per shift, or a total of sixteen crews. Because each flow-line had two to ten changeovers per day, reducing the changeover time for the work area would greatly improve effectiveness. A workshop for developing quick changeovers using a methodology called Single Minute Exchange of Die(SMED)4 was selected for this task. SMED or quick changeover is cov-ered in section 8.3 of this book.

The operations manager decided to have one crew be the pilot crew that would go through the workshop and develop a best practice methodology. This approach proved to be more complex than expected. The area worked with approximately 130 different products, using 35 different processes. Many crews worked with more of one combination than another. Therefore, a typical changeover really did not exist.

In the workshop, the pilot crew categorized changeovers. They initiated improvements that reduced the majority of their changeover times by 40 percent. At the end of the pilot period they presented the results to the product line superintendent. Although they were proud to receive the superintendent's congratulations, they were shocked when he directed them to teach their methods to the other crews. They had not anticipated this directive, and felt that their reward was more work, beyond the original scope of the workshop. As a pilot crew, they synergistically made improvements, however other crews did not readily accept ‘outside’ ideas and passively committed to new methods. Thus, the improvement methods took much longer to be accepted by the other crews.

What actions would have been better? Proactive leadership would have led to faster results. When the operations manager initiated the request for improvement, he should have confirmed the efforts were supported by the superintendent and then communicated this to all crews. The overall objective should have been outlined with the strategy of how a pilot crew would be selected from volunteers, that this crew would make recommendations for best practices, and that all crews were expected to adapt these methods into their changeovers. If the results of the improvement were visible to the crews, and a system was developed to reward the community when the average changeover improved, then the methods would have been implemented quickly. The superintendent should have invested three or four hours of proactive leadership, earning the support of all the crews. By clearly communicating the desired goal and the expectation that everyone will help implement improved work practices, proactive leadership would provide the community with a com-mon vision. This style of leadership and communication open the way for rapid implementation and sustain improved practices.

Proactive leadership is a vital part of developing work place improvements. It can start at any level of the organization. As objectives are selected, approval should be solicited from the area leadership team to clear the way for rapid success. This book should provide the tools to generate compelling programs for higher effectiveness.