Erik Darling I'd Give My Life - A Journey by Folk Music

I'd Give My Life - A Journey by Folk Music 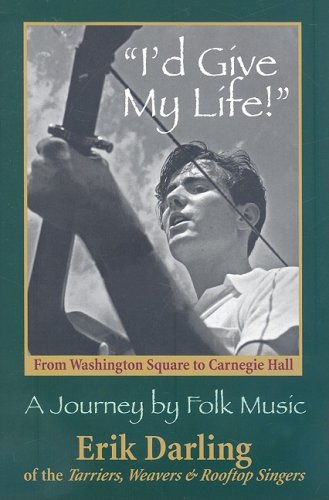 Darling's journey involved the formation of the Tarriers, with actor Alan Arkin, and creating the massive hit The Banana Boat Song, making the Tarriers the first group after the famous Weavers to gain worldwide fame through the singing of folk music, thus preparing the way for the Kingston Trio and all who would follow. Having been inspired by Pete Seeger and the original Weavers, life's typical twists had him taking Seeger's place in that group. Not finding the answers to his internal quest, however, he found himself leaving the Weavers, forming the Rooftop Singers and introducing the 12-string guitar to popular music through their number one hit, Walk Right In. Darling's journey was a perilous one, as anyone's journey in the arts is likely to be, given the twists of fate that can affect the art world, along with the confusion of becoming a political person, but not of the left or the right. He ended up thinking that our political answers lie in the realm of psychology, and in the idea of (just as it sounds): a University for Becoming More Fully Human. Includes a CD with 24 songs.

5. I'd Give My Life - A Journey by Folk Music [Hardcover] Erik Darling