Items related to The Monster's Ring 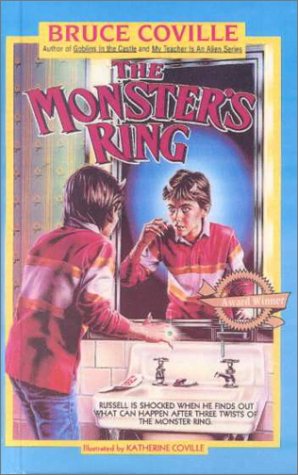 It all starts when Russell Crannaker buys a "monster's ring" from weird old Mr. Elives. Russell is sure the ring is just a silly magic trick -- but he follows the instructions anyway, and slips it on his finger. Then he whispers the magic chant, twists the ring once, and suddenly he's sprouting horns! Hair covers his face and hands. Russell has become...a monster!

Russell quickly learns how to change back and forth from human to monster. But he hasn't paid enough attention to the instructions, and when he puts on the ring on the night of a full moon, and twists it three times, Russell realizes he's gone too far...A monster is loose in Kennituck Falls.

The Monster's Ring is a multi-voiced recording featuring author Bruce Coville himself as narrator and the talented Full Cast Audio family of actors. The roles of the children are played by real life children, which adds an authentic touch, and young Russell's transformation into a monster is guaranteed to delight young and old alike. Reminiscent of classic radio drama, this magical audiobook is even better because it contains the full, unabridged text. Special Feature: An exclusive afterword with author Bruce Coville, who talks about how he first got the idea for the Magic Shop books.

Pursued by the bullying Eddie, timid Russell Crannaker stumbles into Mr. Elives' magic shop, where he buys a mysterious ring that allows him to become a monster. Soon Russell finds himself growing bolder as he begins to express his inner monster. But has he become too bold?

What, exactly, is the ring doing to him? And what price will he have to pay if he fails to follow the directions? This full cast recording, narrated by Bruce Coville himself, perfectly captures the frightfully funny, deliciously scary story that launched the highly acclaimed Magic Shop series.

Book Description Tandem Library. Library Binding. Condition: GOOD. Spine creases, wear to binding and pages from reading. May contain limited notes, underlining or highlighting that does affect the text. Possible ex library copy, will have the markings and stickers associated from the library. Accessories such as CD, codes, toys, may not be included. Seller Inventory # 3248325811