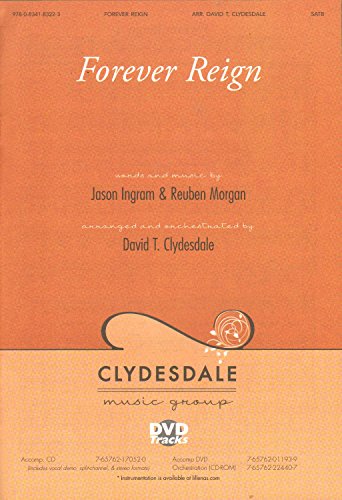 Compel passionate worship with this dynamic anthem written by Jason Ingram and Reuben Morgan. Arranged and orchestrated by David T. Clydesdale, ’Forever Reign’ combines stirring musicianship with a powerful proclamation of truth. It’s no wonder ’Forever Reign’ is quickly becoming a nationwide favorite. To add to the experience, be sure to purchase the accompanying DVD!

David T. Clydesdale is a GRAMMY Award and Dove Award-winning composer, arranger, and orchestrator and producer bringing an impressive resume to the Lillenas roster. David served as album or concert arranger for artists such as Anointed, Glenn Close, Placido Domingo, Steve Green, Larnelle Harris, Sandi Patty, Point of Grace, Kenny Rogers and Hallmark Card’s Christmas albums. Along with his volumes of church choral music, David created works featured by Six Flags amusement parks and in Walt Disney World productions. David has created a long list of well-received choral publications including I Am, The Victor, and , to name a few. He has received five ’gold record’ certifications by the RIAA, for sales exceeding 500,000 units, and one ’platinum record,’ for sales in excess of 1,000,000 units.